Primary elections and why they matter to you: Join the live chat

We have 2 hours of live coverage tonight of key Senate primary races and what the political ramifications could be come November. Plus we'll be giving you the latest news on the Gulf oil spill and the BP fallout. And more from our landmark pilot study on kids and race.

Tonight we’re following three key primary Senate races that are being seen by many as a test of how deep and real the anti-incumbent mood may be. We’ll have reporters on the ground in Arkansas, Kentucky and Pennsylvania to bring you the very latest on the races. We’ll also draw, as always, on the breadth and depth of our political panel’s expertise. They’ll provide rolling analysis, including what tonight’s results could mean for the midterm elections in November.

We’ll also have the latest in the Gulf oil spill disaster, four weeks after the explosion that ruptured the well. Today BP released new underwater video showing oil and gas erupting from the blown-out well. It was recorded after the company inserted a pipe into the gushing well to divert some of the oil to the surface. Let’s just say the images aren’t comforting.

Meantime, Louisiana Governor Bobby Jindal’s office released a photo showing heavy oil coming ashore in his state while a NOAA official said aerial surveys showed some tendrils of light oil close or already in the loop current, which takes water south to the Florida Keys. In Senate hearings today. Interior Secretary Ken Salazar was grilled by skeptical lawmakers. It was Salazar’s first appearance since the Deepwater Horizon rig exploded and sank. Tonight, we’ll hear from Illinois Rep. Luis Gutierrez, who is now calling for a permanent ban on oil drilling leases for BP.

(CNN) - A 5-year-old girl in Georgia is being asked a series of questions in her school library. The girl, who is white, is looking at pictures of five cartoons of girls, all identical except for skin color ranging from light to dark.

As she answers her mother watches, and gently weeps.

END_OF_DOCUMENT_TOKEN_TO_BE_REPLACED

[cnn-photo-caption image=http://i2.cdn.turner.com/cnn/2010/images/05/18/art.vert.cheerleading.coach.jpg caption="Christie Elliot, 25, was charged with luring a minor for sexual exploitation and sexual conduct with a minor." width=292 height=320]

An English teacher and cheerleading coach at an Arizona high school has been arrested for having an illicit relationship with a student, police said.

Christie Elliot, 25, was charged with luring a minor for sexual exploitation and sexual conduct with a minor.

According to the Tucson Police Department, Elliot had inappropriate physical contact with a child at Empire High School. Authorities said the child was one of her students, but would not divulge the gender or age of the alleged victim.

Elliot was arrested after the child’s parent found disturbing messages on the student’s cell phone, police said. “The parent reported the messages to the school because they believed the messages were from the child’s English teacher who is also the cheerleading coach,” the police added.

END_OF_DOCUMENT_TOKEN_TO_BE_REPLACED

Interactive: What the primaries will mean for mid-terms

Tuesday's primaries and a special election to fill an open congressional seat will be the best sign yet of how the political balance of power could change in November's midterm elections.

To see what's at stake, check out this interactive slide that breaks down which seats may be up for grabs this fall. 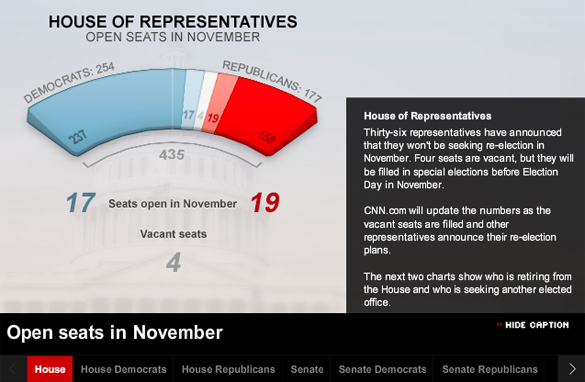 Must see AC360 video: Anderson on BP and the Gulf oil spill

Last night, Anderson devoted the first segment of his show to a close examination of the Gulf oil leak. In the first video, you'll see Anderson breaking down BP's assertion that they're making good progress on containing the oil leak. In the second video, hear from presidential historian Douglas Brinkley about how he thinks this newest claim that BP is containing 20% of the leak is "a PR stunt."

Keeping Them Honest: Who is Anderson talking about tonight?

Inside the AC360 doll study

If you missed last night's first installment of our landmark CNN pilot study on kids and race, take a look here.

Tonight's primary contests in Pennsylvania, Arkansas and Kentucky will determine whether the much talked about anti-incumbent mood is real. Not sure where the races stand? Take a look at this interactive feature that explains the tough battle these candidates have in store.

For latest election results, be sure to watch AC360° at 10pm ET. 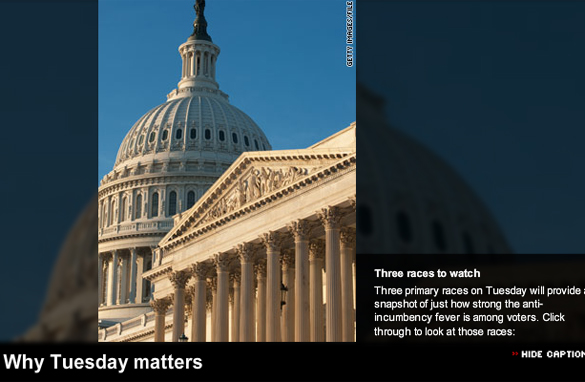 [cnn-photo-caption image=http://i2.cdn.turner.com/cnn/2010/images/05/18/art.vert.find.mitrice.jpg
caption="A member of Congress has asked the Department of Justice to investigate the circumstances surrounding the disappearance of Mitrice Richardson, who has been missing since September 17." width=292 height=320]

A member of Congress has asked the Department of Justice to investigate the circumstances surrounding last year’s disappearance of a California woman.

Rep. Maxine Waters, a democrat from California, said in a letter she is “deeply concerned” about the decision by the Los Angeles Sheriff’s Department to release Mitrice Richardson from custody following her arrest on September 16, 2009.

Richardson was accused of not paying for her $89 dinner at a Malibu restaurant. Sheriff’s deputies charged Richardson with defrauding an innkeeper and for possessing a small amount of marijuana.