(CNN) The Los Angeles City Council overwhelmingly approved a boycott of Arizona-based businesses and governments Wednesday unless the state repeals a new law giving police the power to question a detainee's immigration status.

Several other California cities, including San Francisco and Oakland, have already adopted resolutions requesting city departments to not sign any new contracts with Arizona companies.

The Los Angeles resolution passed Wednesday said Arizona's new immigration law "encourages racial profiling and violates Fourteenth Amendment guarantees of due process and equal protection for U.S. citizens, legal residents and visitors who are detained for suspicion of being in the country unlawfully."

To read the full resolution, click on the amendment below. 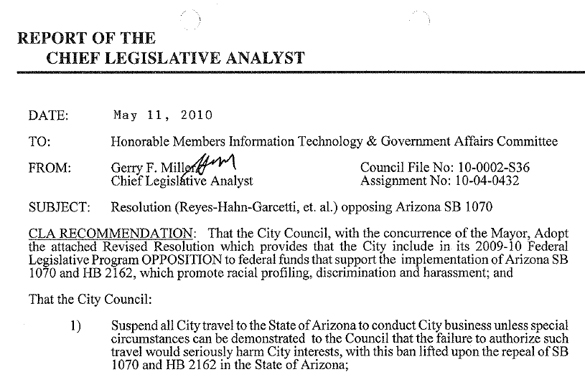