Clearly, President Obama's choice of Solicitor General Elena Kagan for the Supreme Court came as no surprise to many. Reactions flooded my inbox before Obama was even done speaking.

Here are some excerpts – in order that I received them – of statements reacting to Kagan's nomination. Some interesting highlights: Mitch McConnell notes her "brief litigation experience," John Podesta says she'll be "a much-needed progressive voice on a Court dominated by conservatives," and Orrin Hatch says his vote for her to be Solicitor General by no means guarantees his support for her nomination to the bench.

South Carolina Senator Lindsey Graham, a GOP member of the Judiciary Committee:
"Solicitor General Kagan has a strong academic background in the law. I have been generally pleased with her job performance as Solicitor General, particularly regarding legal issues related to the War on Terror. I look forward to meeting her again, this time to discuss her qualifications to sit on the highest court in the land.
"As a member of the Senate Judiciary Committee, I intend to be fair and firm in my questioning of the nominee. The hearings can be a valuable public service as they give us a window into the nominee's judicial philosophy and disposition. I hope we will have a meaningful opportunity to explore the qualifications, judicial temperament, and judicial philosophy of Ms. Kagan."

Wisconsin Senator Russ Feingold, a Democratic member of the Judiciary Committee:
“I congratulate Elena Kagan on her nomination to the United States Supreme Court. I welcome President Obama's decision to nominate someone to be the first Supreme Court justice from outside the judiciary since former Chief Justice William Rehnquist and Justice Lewis Powell. Ms. Kagan's confirmation in 2009 as the first woman to become Solicitor General was an historic moment for our nation. As Solicitor General, Ms. Kagan has served the nation ably. Considering the impact the Supreme Court has on our country, I take very seriously my responsibility as a member of the Senate Judiciary Committee to evaluate a nominee. I look forward to reviewing thoroughly Ms. Kagan's record, meeting with her and questioning her during what I hope will be a productive and informative confirmation process.” 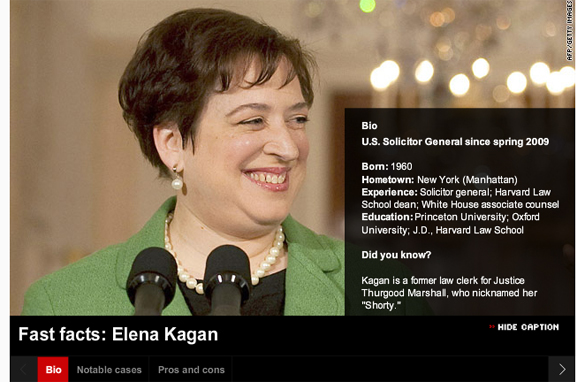 Reporter's Note: The president has been plagued by accusations that he was not born in Hawaii, but instead in Kenya. I know how he feels. Many have suggested I was born to wolves and merely left in the city to be raised by my parents. Just kidding (I think that was some comic’s line.) Here is my latest letter to the White House.

I can’t remember which comedian made the joke, but it went something like this: “People ask me where I was born and I say, ‘I can’t recall. I was so young at the time.’” Ha! Just a little “birther” humor there to kick things off, because I think we could use a little more levity around that whole topic.

No doubt you’ve heard that old bit of advice, “Pick your battles.” And frankly, I wish all the folks who are worried about your birth certificate would think about that more often.

Let’s put aside for a moment the question of whether they have reason to mistrust your American-ness. Heck, let’s even say they could produce some kind of iron-clad proof that you are in fact not a natural born American. The question I have is: What difference do they think that will make at this point?

I know that a lot of people are not happy with your leadership. Fair enough. That’s politics, policy and popularity, and every voter not only can, but should judge that on a regular basis. If they want to trash you on that front, mount a campaign for your impeachment, whatever, they have every right to do. But even some ardent critics, I suspect, would be hesitant to demand the resignation of a sitting president over an issue like “he wasn’t qualified to run, therefore he wasn’t qualified to win, and therefore he isn’t qualified to sit.” Uh, especially after he’s already been in the Oval Office for almost a year and a half. END_OF_DOCUMENT_TOKEN_TO_BE_REPLACED