Lt. Col. to POTUS: "I cannot in good conscience obey ANY military orders"

Update: Lt. Col. Terry Lakin, the Army officer who has refused to deploy to Afghanistan because, in his view, President Obama has not proved that he was born in the United States and is therefore ineligible to be president, entered a deferred plea at his arraignment hearing Friday morning.  Read his letter to President Obama posted on SafeguardOurConstitution.com.

For more than seventeen years, I have had the privilege of serving my country as a member of the U.S. Armed Forces, including overseas assignments in imminent danger/combat areas in Bosnia and Afghanistan.

The United States is an example to the rest of the world of a stable, civilized democratic government where all men are created equal and the rule of law is cherished and obeyed. The U.S. military teaches and promotes the rule of law and civilian control of the military to many other nations and militaries around the world. Every soldier learns what constitutes a lawful order and is encouraged to stand up and object to unlawful orders. My officer's oath of office requires that I swear to support and defend the Constitution of the United States.

I recently received deployment orders for a second deployment to Afghanistan. My orders included a requirement to bring copies of my birth certificate. I will provide a certified copy of my original birth certificate with common, standard identifiers, including the name of an attending physician and a hospital. Every day in transactions across the country, American citizens are required to prove their identity, and standards for identification have become even stricter since the terrorist attacks on 9/11.

In 2008, after pressure from the news media, Senator McCain produced an original birth certificate from the Panama Canal Zone; a Senate Judiciary Committee hearing examined and affirmed his "natural born" status and Constitutional eligibility to serve as President. The U.S. Senate was silent about your eligibility, despite statements from Kenyan citizens that you were born in Mombasa, including your paternal grandmother and the Ambassador from Kenya to the U.S. during a radio interview. Hawaiian state officials claim they cannot release an original birth certificate without your consent.

I have attempted through my chain of command for many months to get answers to the questions surrounding your eligibility. I also sought answers, unsuccessfully, through my Congressional delegation. You serve as my Commander-in-Chief. Given the fact that the certification that your campaign posted online was not a document that the Hawaiian Department of Homelands regarded as a sufficient substitute for the original birth certificate and given that it has been your personal decision that has prevented the Hawaiian Department of Health from releasing your original birth certificate or any Hawaiian hospital from releasing your records, the burden of proof must rest with you. 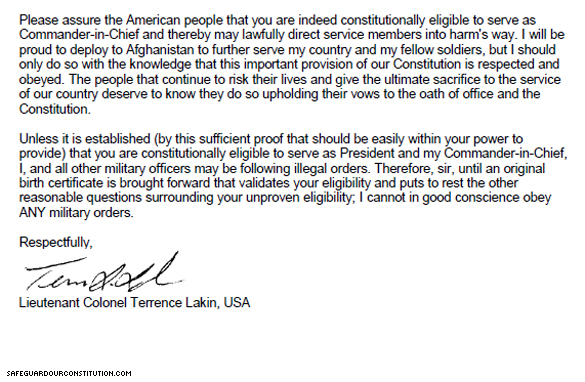