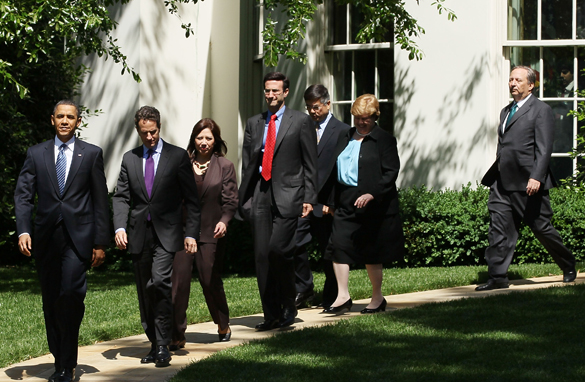 President Obama is followed by Treasury Secretary Timothy Geithner, Secretary of Labor Hilda Solis, Director of the Office of Management and Budget Peter Orszag, Secretary of Commerce Gary Locke, Chair of the Council of Economic Advisers Christina Romer and Director of the National Economic Council Larry Summers, in the Rose Garden of the White House (Photo by Mark Wilson/Getty Images)

Staff Winner: Marshall who wrote: Who's the leader of the club that's made for all us geeks?
B-A-R, A-C-K, O-B-A-M-A
Viewer Winner: Rich Archer from Toronto who wrote: C'mon, everybody: "Feelin' HOT HOT HOT!!"

Video: The science of oil slicks

[cnn-photo-caption image=http://i.cdn.turner.com/cnn/2010/WORLD/americas/03/12/recovery.dangers.haiti/t1larg.recovery.gi.jpg caption="Haitians desperately try to enter the police station where an aid distribution point has been set up in Port-au-Prince." width=300 height=169]

Tonight we have a report on the situation on the ground in Haiti. Sean Penn will talk to Anderson about how relief is reaching Haitians and whether or not the situation has improved. Penn has been working in Haiti since the earthquake with his organization, the J/P Haitian Relief Organization.

The mission of J/P HRO is to “save lives and bring relief to the Haitian people quickly and effectively.”

Learn more about what the organization is doing in Haiti here..

Interactive: Timeline of the oil spill

A four-story oil-containment dome has reached the 5,000-foot-deep Gulf of Mexico seafloor, and BP workers are using remote-controlled craft to start placing it over a gushing wellhead, the U.S. Coast Guard said Friday afternoon.

Follow the time line of events from the April 20th explosion through today. 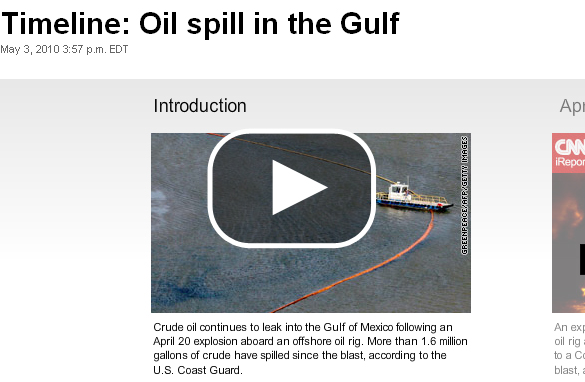 [cnn-photo-caption image=http://i2.cdn.turner.com/money/galleries/2010/news/1004/gallery.Goldman_Sachs_Players/images/lloyd_blankfein.gi.jpg caption="You know what Goldman Sachs CEO, Lloyd Blankfein, and the island nation of Kiribati have in common? In 2007 they each made about the same amount of money."]

You know what Goldman Sachs CEO, Lloyd Blankfein, and the island nation of Kiribati have in common? In 2007 they each made about the same amount of money. $68 million. I’m no enemy of capitalism, and I love the notion of folks getting ahead, but doesn’t that seem perhaps a tad excessive?

I return to the smiling Mr. Blankfein because in the wake of his visit to Capitol Hill to defend Wall Street, he has continued to suggest that people should not be angry with his staggering income because, after all, he earned it.

Well, let’s look at his theoretical time sheet. We’ll assume he’s a hard worker, never takes vacations, and even on holidays catches up on paperwork. But the financial markets are closed on weekends, so he gets 260 working days in a year. I’ll further assume he’s a steady laboring guy; your head doesn’t get that shiny without a lot of hair pulling and sweating the details. We’ll say he is at the office at least 12 hours a day; so 3,120 hours for the year.

We do some math, carry some ones, and Bob’s your uncle, turns out old Lloyd’s going rate is just under $22,000 an hour. Or $363 a minute. Which raises a question: How can anyone possibly “earn” that much, in the sense that most of us understand the concept of earning?

Pro athletes, heart surgeons, plumbers, hookers, and hit men don’t rake in that kind of dough. Heck, load up an airport van full of them all mixed together and they’d still collectively be paupers compared to the oh so valuable Lloyd.

For that matter, take your run-of-the-mill extremely well-paid professional, say some gal who pulls a million a year, which is not just Slurpee money. If she started working at the age of 21, she would not get to clean out her desk and book a tee time until she was almost 90 years old; and at that point she would have made only what Senor Lloyd banked in one year.

So while he certainly received, scored, banked, snared, and/or got a lot of money that year, his argument that he “earned” it, I suspect for many working folks, rattles like a counterfeit quarter. Or 272 million of them. But who is counting?

[cnn-photo-caption image=http://i2.cdn.turner.com/cnn/2008/POLITICS/06/09/btsc.obama.race/art.obama.gi.jpg caption="Barack Obama's father was from Kenya; his white mother was from Kansas; and Barack is from Hawaii."]

Smears claiming Barack Obama doesn’t have a birth certificate aren’t actually about that piece of paper — they’re about manipulating people into thinking Barack is not an American citizen.

The truth is, Barack Obama was born in the state of Hawaii in 1961, a native citizen of the United States of America.

Next time someone talks about Barack’s birth certificate, make sure they see this page.

Nashville chefs have cooked up plans to keep rescue workers fed and farmers in business and to whet the appetites of tourists to return once floodwaters subside.

"I grew up with the philosophy in my family that when you have a tough time in whatever area of life, a good hot meal makes a lot of things better," said chef Tandy Wilson of City House restaurant.

Though his restaurant was stocked and operational and had planned a "flood menu," his difficulty in getting to the building spurred Tandy to shut down his business and rally his staff to volunteer.