Pakistan is 'epicenter of Islamic terrorism'

The suspect in the Times Square bombing attempt was caught as he was seeking to flee to Pakistan, a nation that analyst Fareed Zakaria calls the "epicenter of Islamic terrorism."

"It's worth noting that even the terrorism that's often attributed to the war in Afghanistan tends to come out of Pakistan, to be planned by Pakistanis, to be funded from Pakistan or in some other way to be traced to Pakistan," said Zakaria. He added that Pakistan's connection with terrorist groups goes back decades and has often been encouraged by that nation's military for strategic reasons.

Faisal Shahzad, a 30-year-old naturalized citizen of Pakistani descent, had recently been trained in bomb making in Pakistan's Waziristan province, according to a federal complaint filed in court Tuesday. CNN reported Tuesday that Faisal Shahzad's father is a retired vice-marshal in the Pakistani Air Force.

[cnn-photo-caption image=http://i.cdn.turner.com/cnn/2010/OPINION/05/04/oneal.haiti.children/tzleft.oneal.shaquille.gi.jpg caption="O'Neal: It's essential for Haiti's future to remember its children, make sure they thrive." width=300 height=169]

When the January 12 earthquake hit Haiti, I watched hour upon hour of coverage on CNN. Like everyone else in the world, I saw images that were among the most horrifying caused by a natural disaster in our time.

I have never been to Haiti. Like many, I have friends and even family members of Haitian descent. But what occurred to me and most others were the questions: "How could this happen and be so destructive?" "Why the lack of infrastructure?" "Why the lack of preparation for disaster?" No country could be totally prepared for that kind of disaster, but Haiti and its people seemed to be particularly disadvantaged against Mother Nature's might.

Crews working to stem the tide of oil in the Gulf of Mexico capped one of the three leaking points Wednesday, a BP executive said.

John Curry, director of external affairs for BP, said the leak that was capped was the smallest of three. Curry said the pipe was cut off and sealed with a slip valve.

BP, which owns the damaged well, is responsible for the cleanup and costs of the massive oil spill.

Video: Death of a white supremacist

[cnn-photo-caption image=http://i2.cdn.turner.com/cnn/2010/US/weather/05/05/tennessee.flooding/smlvid.tennesseeroad.gi.jpg caption=" The flooding in Tennessee is absolutely awful, and we owe the people there more attention" width=300 height=169]

Reporter's Note: The President is facing a variety of urgent matters at the moment, from the Gulf oil spill to the attempted terror strike. But I’m using my daily letter to the White House to point out one more.

Sometimes big news stories just get steamrolled by even bigger stories. It’s not right and it’s not fair, and it’s happening to Tennessee right now. The flooding is absolutely awful, and we owe the people there more attention. In between doing research and stories on the attempted terror attack in New York, and the oil spill in the Gulf, I looked at some of the pictures from Nashville this afternoon and I could not believe my eyes.

I don’t know how much time you have spent there, but it really is a lovely state full of very nice folks, and Nashville is a blast. I went there a few years ago with one of my daughters on our way to Space Camp in Alabama and we had so much fun. The Country Music Hall of Fame (now surrounded by water,) Hatch Show Print (ditto,) Ryman auditorium (uh…that too,) and of course the Grand Ole Opry (which is just plain under water.)

We stayed at the mind-blowingly huge Gaylord resort right next to the Opry, and had seats ten or twelve rows back from the stage. Porter Waggoner was still alive and it was a thrill to see him, along with a mesmerizing parade of other terrifically talented musicians. Song after song, act after act; we enjoyed ourselves immensely.

We ate barbeque, rode around Vanderbilt University, spent a fascinating afternoon at the Country Music Hall of Fame, and chatted with a songwriter who appeared there to explain his work to a hundred of so of us in one of the theaters. Oddly enough, I was talking to my wife a couple of weeks ago about taking the whole family for a visit.

END_OF_DOCUMENT_TOKEN_TO_BE_REPLACED 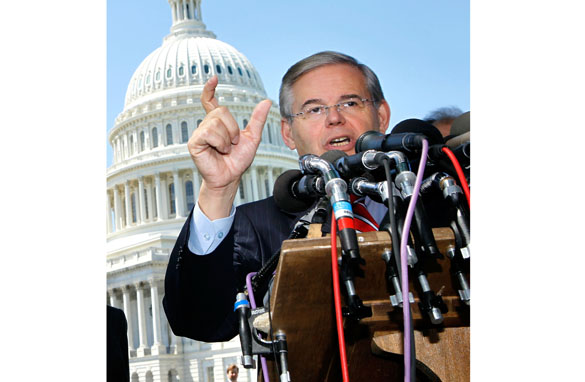 U.S. Sen. Robert Menendez (D-NJ) speaks during a news conference on Capitol Hill May 4, 2010 in Washington, DC. The press conference was focused on the oil spill in the Gulf of Mexico and on future coastal drilling policies. (Photo by Alex Wong/Getty Images)

Staff:
Chuck Hadad
"And to the people of the Gulf Coast, I say, like so many law-makers have said before me, this is the world’s tiniest violin …"