Sumo wrestling students hold babies as they try to make them cry during the Crying Sumo competition at Sensoji Temple on April 25, 2010 in Tokyo, Japan. The first baby to cry wins the competition. The ceremony takes place in Japan to wish for the good health of the child as it is said that crying is good for the health of babies. 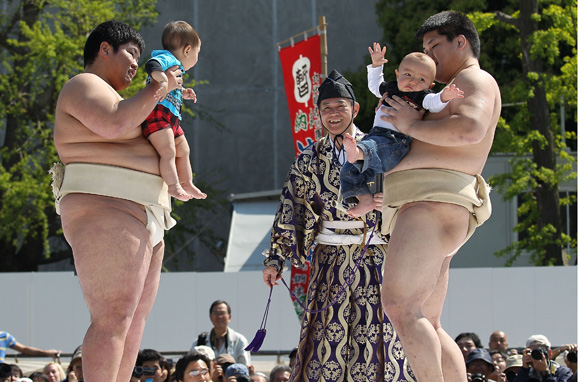 Kara from Charlottesville, Virginia
Finally, someone who can get those E-Trade babies to shut up!

Video: Will aliens be hostile?

Dear President Obama #463: Throw the rock you have

Have you ever heard the old saying, “It’s a poor workman who blames his tools”?

I like that phrase because I’ve met a lot of people in my life who seem to always have one more “need” that must be taken care of before they can do their job. “I’d weed the garden, but I need some new gloves.” “I’d write that report, but I need Stan’s part first.” “I’d make things better, but I need to see how it’s going to turn out.”

I’m sure you’ve encountered the same act. This came to mind as I watched the debate over this whole Wall Street crackdown that you and your team are working on. Of course there is opposition, questions about whether it will get passed, and arguments over what the impact will be…and on and on and on, just like it always is. I have no complaint with you pushing on and fighting for the votes. That is what you are supposed to do.

What I am wondering is the meantime is: Do you really need it? I mean this in truly the fairest, non-partisan way. I mean, you are the president and we have a lot of laws in this country. Easily more than a hundred, I think. What if you instructed your entire administration and every federal agency to aggressively enforce every existing regulation and law to clamp down on financial practices that you think are unfair or that cheat consumers or investors?

END_OF_DOCUMENT_TOKEN_TO_BE_REPLACED

Editor's Note: After Monday night's AC360°, we heard from many of you about the Goldman Sachs' fraud case and the Bystander behavior segment. What do you think?

Of course Goldman Sachs and others committed fraud. Everyone from the mortgage brokers who solicited bad loans and turned around and sold them, to the Wall Street Fat Cats that promoted mortgage backed securities for sale while simultaneously shorting them are all guilty of Fraud. If there is any justice, they should all rot in jail and lose all their ill gotten gains.