Experts: No end to volcano ash in sight 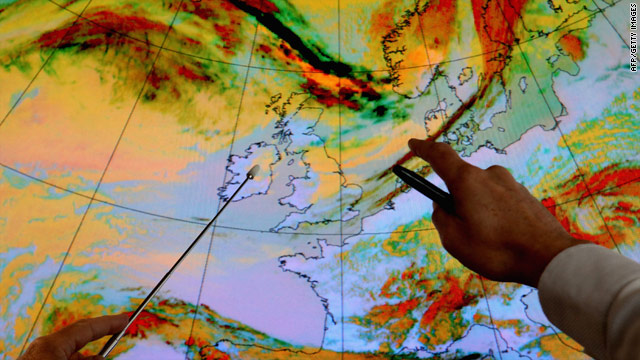 Weather experts predicted Friday that a volcanic ash causing chaos to air traffic across Europe would affect the region well into the weekend and possibly beyond as the dust cloud continued to spread.

Scientists said it was too soon to predict when the Eyjafjallajökull volcano in Iceland would cease spewing ash, raising the prospect of thousands more grounded flights in coming days.

Prevailing westerly winds are expected to fan the massive plume of dust from an erupting volcano in Iceland further east and north, according to predictions from the London Ash Advisory Center.

By 07:00 GMT Saturday (7 p.m. ET) the cloud traveling at up to 9,000 meters (30,000 feet) is forecast to be covering parts of Russia, Poland, Finland and other East European countries while continuing to affect the UK, Sweden, Norway, Germany, Denmark and Netherlands.