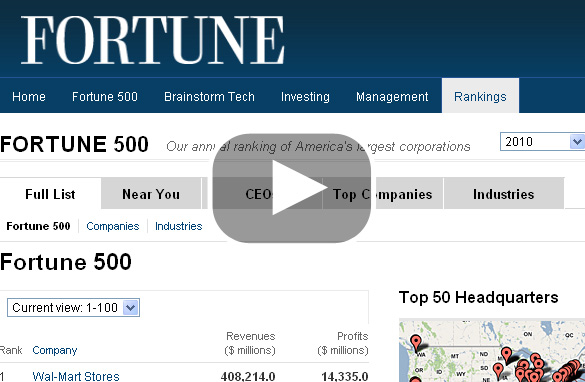 Click on the link above to see Fortune 500's annual ranking of America's largest corporations.

With fat days over, NASA must innovate

[cnn-photo-caption image=http://i.cdn.turner.com/cnn/2010/POLITICS/04/15/obama.space/t1larg.jpg caption="The U.S. shuttle program is ending this year. The U.S. will have to catch a ride with Russia's Soyuz after that." width=300 height=169]

In a long-awaited speech Thursday in Florida, President Obama will boldly go where no president has gone before, laying out an entirely new vision for the U.S. space program. The firestorm of controversy has already begun

For more than 50 years, presidents have pushed for government rockets to send astronauts to space, the moon and possibly Mars.

But now a new paradigm is being proposed. The moon program is off the table, and Mars is only a distant possibility. NASA is essentially getting out of the astronaut business, letting the Russians and private enterprise take over. The glory days of NASA, some say, are over.

Americans flying to Europe on Thursday are in for some bumps in their itineraries as clouds of volcanic ash from Iceland close airspace in parts of Europe.

The United Kingdom's airspace was closed about noon Thursday (7 a.m. ET) and will be closed until at least 7 a.m. (2 a.m. ET) Friday, air traffic authorities said. Delta Air Lines has suspended service into and out of the UK for the rest of Thursday, spokesman Anthony Black said.

"At this point, it's only the UK (other flights have departed/arrived for the day). We will automatically rebook any cancelled flights. We are waiting to hear additional info from European air traffic controllers before we make any other adjustments," Black said in an e-mail.

Encounters between aircraft and volcanic ash can happen because ash clouds are difficult to distinguish from ordinary clouds, both visually and on radar, according to the U.S. Geological Survey.

Ash clouds can also drift great distances from their source. The recent volcanic eruption in Iceland sent a huge plume of ash moving across the Atlantic, disrupting air traffic across Western Europe.

The political campaign season is off and running, whether you're ready or not. According to the latest CNN poll, registered voters share the polarization that now rules Washington.

Nearly as many voters hold unfavorable opinions about each of the three political entities tested as favorable ones. Democrats are liked by 49 percent of voters and disliked by 46 percent. My party is equally liked and disliked: Republicans have a 46 percent favorable and 46 percent unfavorable rating, a major improvement from where we were a year ago.

And the political rage of the moment, the Tea Party, has a 38 percent favorable and 36 percent unfavorable rating. But as proof that the Tea Party is an unpredictable force that may stay around for a while, the newest Rasmussen poll showed that 24 percent of U.S. voters now say they consider themselves a part of the Tea Party movement. That's an 8-point increase from a month ago.

Both parties gutless on immigration

As a typical American who shuns the hard work my grandfathers did, last week on this site, I took responsibility for creating the problem of illegal immigration.

Good thing. Because this week, it became clear that, in Congress, neither Republicans nor Democrats have the guts to take responsibility for fixing the problem of illegal immigration.

And that was a giant leap forward from where Kyl was in 2005, when he co-sponsored with Sen. John Cornyn, R-Texas, a much simpler and less plausible enforcement-only bill that looked like the senators sketched it out on a cocktail napkin.

'Men Working' leaves half the world out

My son Alden called me at work one morning recently. He wanted to know my thoughts about the word "mankind" and whether it's OK to use the term in an essay. So I blurted out, "Not if you don't want to exclude more than half of the human race!"

Only then did I learn I was on the speaker-phone with other students in the principal's office listening. So I asked the boys in the room the question: "Would you feel left out if you were referred to as part of 'womankind?'" The answer was, of course, yes.

With my son's innocent question, memories flooded back of all those times at work as a journalist in the newsroom when the male reporters were sent out on the big stories, but not the women.

Reporter's Note: The President and others often decry the loss of civility in politics these days. But then, the DC crowd, despite their long standing disagreements, have known better times. Like I do, every day when you I write to you.

I watched the most astonishing thing very late last night, and no, it wasn’t that guy down the street coming home drunk again. It was a conversation on a public television channel. (I was looking for a Gilligan’s Island marathon and just stumbled onto this other show.) One of our former presidents was there along with some lawmakers, both past and present, and a mix of journalists, legal analysts, and one guy who I think was a carnival barker. Kidding.

Anyway, there was a moderator who stalked around in front of their chairs, throwing questions to the panelists while they went over how much power a president does or does not have to wage war. Since the people there represented a variety of political views, they quite naturally did not agree with each other on everything. But they also did something that was startling against the backdrop of what we see all the time: they listened to each other. They did not interrupt, but by the same token, no one filibustered. They disagreed without insulting their opposition, or throwing chairs, or setting the curtains on fire.