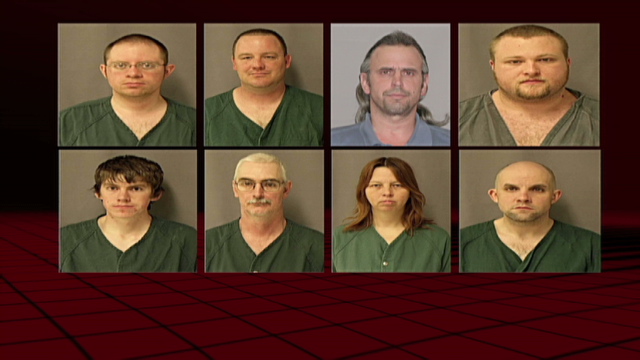 Eight of the self-styled Hutaree militia members arrested this week.

We’ve seen a ratcheting up of violent rhetoric and even violent plots in recent weeks. This edition of Wingnuts of the Week takes a look at a new Code Pink “citizen’s arrest” of Karl Rove and the real arrest of the Hutaree militia.

Militia movements exist well off the grid when it comes to conventional domestic politics. But the arrest of the Michigan-based Hutaree anti-government militia group raised new questions about the increasingly ugly and fear-fueled fringes of the political landscape.

The small, self-style Christian militia group (members say “Hutaree” means “Christian warrior”), led by father David Stone, was arrested by the FBI early this week on charges that they plotted to murder a local law enforcement officer and then bomb his funeral procession to up the body count in an attempt to spur a civil war in the United States.