This combination of photos shows US Secretary of State Hillary Clinton and Pakistani Foreign Minister Makhdoom Shah Mehmood Qureshi laughing during a press briefing following their bilateral meeting at the Department of State in Washington, DC, on March 24, 2010. Clinton said the United States had started a 'new day' with Pakistan in hearing its concerns. Clinton opened a first-of-a-kind 'strategic dialogue' with Pakistan, hoping to show the country's widely anti-American public that the United States wants a relationship that goes beyond short-term battles against Islamic militants. 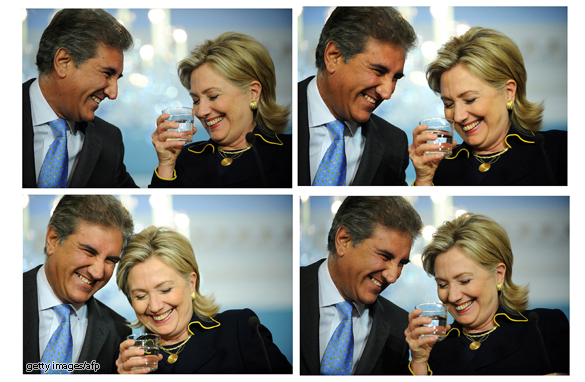 “Is that Bin Laden in your pocket, or are you just happy to see me (hiccup).”

"Pakistan and the US try out a new approach in foreign relations with each other. Operation: V.O.D.K.A."