Two young men are accused of “phoning in” a bank robbery in Connecticut.

“I’ve heard of drive-up robberies where they rob the bank via drive-up windows,” said Det. Lt. Michael Gagner of the Fairfield Police Department. “But I’ve never had somebody call ahead and say ‘get the money we’re coming’.”

The bizarre and comical heist unfolded yesterday afternoon at a branch of the People’s Bank in Fairfield. A bank employee received a phone call from a person demanding that they assemble $100,000 in large bills with a warning of a “blood bath” if their orders were not met, authorities said.

The employee hung up the phone and immediately called 911, Gagner told CNN. The bank also initiated a lockdown but not before the caller’s accomplice was already inside, Gagner said.

According to Gagner, the accomplice handed a teller a note demanding money at the exact same time the bank employee was talking on the phone to the police.

“The guy is literally giving us a blow by blow, saying the robbery is going down,” Gagner said.

After passing the note and collecting about $900 dollars in cash, the suspect politely asked to be let out the bank, Ganger said. By this time, patrol cars were already on the scene.

The alleged robber left the bank and encountered a police officer who ordered him to stop, Gagner said. The suspect then tried to run to the car where the caller was waiting. Both were arrested without incident.

One suspect has been identified as Albert Bailey, 27, of Bridgeport. His accomplice is a juvenile. They are charged with First Degree Robbery and Threatening in the First Degree. Gagner said Bailey is currently on probation for another bank hold-up several years ago.

“We were all kind of cracking up with the call ahead aspect of it,” Gagner said, “definitely unusual technique.”

Gagner added that the robbers insisted that the money waiting for them not be put in a dye pack. Their wishes were not followed and the bag of cash the suspect left the bank in, exploded in dye when he threw it on the ground. 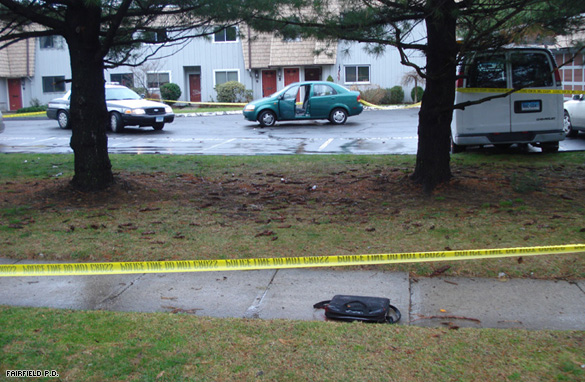 The bag of cash with which the suspect left the bank, exploded in dye when he threw it on the ground.