A pig's head and a threat: Resign or die!

Program Note: Don't miss Part 2 of Gary Tuchman's report on drug violence in the murder capital of the world tonight at AC360° at 10PM ET.

Two weeks ago near mayor Jose Reyes Ferriz's office, a severed pig's head was left in a plastic bag with a note warning that if the mayor didn't step down he'd be dead.  The mayor of Juarez, Mexico says it's not the first time he's been threatened and says it's because he has refused to back down from the drug lords and has taken it upon himself to try to root out corruption within the police force. On the same day the mayor received this warning, yet another police officer was killed.

This is life the world's most murderous city, which sits just across the border from El Paso, Texas.

Last year while covering the drug war here, photojournalist Gil DeLaRosa and I went to the city morgue where an officer was laying dead on one side of the room, a cartel member on the other.  Bodies were overflowing the small facility.  We didn't think it could get any worse.  It has.

Even though he is a marked man, Mayor Reyes is still going through his daily routine, though with increased security.  Gil and I, along with reporter Gary Tuchman, met up with Mayor Reyes at a scheduled event.  He spoke with anger about what his city has become.  He says he wants the drug lords' reign over his city to end.  He's disgusted at the numbers of people murdered every day.

He now travels with armed guards and a caravan of vehicles protecting his every move.  He says he will not stand down.  He will continue his fight despite the threats.  He admits fearing for his family and for his own life, but says he worries about his city even more.  He wants Ciudad Juarez to return to the vibrant city it was before the drug war took over. 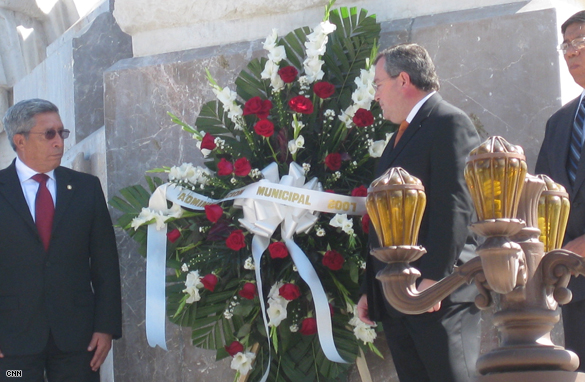