Reporter's Note: The president has to put up with a lot of absurdities in DC. Not unlike taking a trip through the looking glass. No doubt, he’s glad he has my daily letters as a guide! 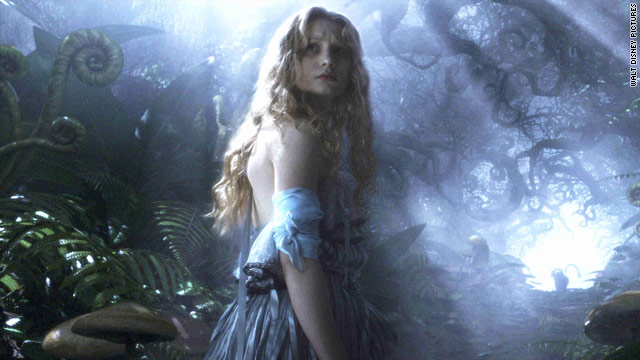 Alice (Mia Wasikowska) finds herself back in a mixed-up world in 'Alice in Wonderland.'
Tom Foreman | BIO
AC360° Correspondent

So here I am just a day after telling you that I don’t find movies as interesting as I once did, and lo and behold I was lured off to the cinema this very evening by my wife and younger daughter! The attraction was the long-awaited and much ballyhooed “Alice in Wonderland” in 3D by Tim Burton, and of course it was visually marvelous. Call me crazy, but keep an eye on this Johnny Depp fellow. He’s going places!

That said, the story of Alice, for my taste, is a bit like the story of someone else’s dream. You know what I mean: A friend sees you and launches into a breathless recounting of his or her fascinating nightmare about a mountain of seals and a Viking. At first it seems interesting enough, but ten minutes later they’re still droning on, and you just feel sleepy. I imagine all your meetings with Harry Reid are kind of like that. Ha! (Actually, the only Alice in Wonderland movie that has ever really popped my cork, is a 1988 version by the Czech surrealist, Jan Svankmajer. Freakier than family dinner at the Kardashian house.)

In any event, one of the key problems with this new version, for me, is that my expectations were really high. Consequently, I was almost destined to be a wee bit disappointed.

I should have known of course. Back when I was a film critic I learned the “inverse promotion” rule of movies: If a movie is hyped too hard before it comes out, sometimes that means it is really not very good and the movie company feels like it must recoup all of its investment by a strong showing on the first weekend before everyone figures out how bad it is. So the worst films actually, at times, get much more help from the studios in terms of ads and promotions, than better films do.

I know that sounds ridiculous, but trust me, it happens. And not just in movies. It happens in politics too. Sometimes the worst ideas are the ones that a political party will most vigorously defend; precisely because those ideas are so bad that they won’t fly unless they are artificially kept aloft.

My advice: Don’t back down just because you face political opposition from the other party. That is to be expected. And don’t just shrink from snap public opinion polls that might run against your plans. But when public sentiment turns hard against an idea, and it stays that way over time, a smart leader re-examines his or her premise to see if it is missing something…if maybe the situation or framework has changed in a way that requires a change in the screenplay too. That is hard, no doubt, but pounding ahead with a show that no one wants to watch is even harder in the long run.

Btw, really not meaning to slam the new Alice in all this. Like I said, it was generally good fun. I didn’t feel like I wasted my money; just would have enjoyed a little more bang for the buck.

So as you can tell I was out for the evening. Hope I did not miss you call. (He said…with a Cheshire Cat grin…)
Regards,
Tom