While many of you were at work or in school today, Democrats and Republicans were duking it out again over health care—this time at President Obama’s health care reform summit.

If you missed some or all of the debate, don’t worry, we’ve got your back. 360 MD Sanjay Gupta will be anchoring a special hour tonight, focusing on what some say is a make-or-break moment in the battle. We’ll give you all the highlights and key moments of today’s summit and tell you what it all means going forward—for your health, your wallet and your peace of mind.

What was on the menu?

President Obama and Republican and Democratic leaders engaged in a spirited but civil debate at a health care summit Thursday, finding agreement on some issues but appearing to find little common ground on how to move forward in a bipartisan way.

Analysts are weighing in on what took place during the summit and what it will mean for health care reform.

But we were wondering what was on the menu for lunch. One of our producers reports that it was on the healthy side - no surprise there.

Take a look at the choices:

Apparently, when Obama was walking back to Blair House from the White House, to resume the meeting a reporter shouted a question asking what he had for lunch.

"Chicken," he called back.

Now what? Democratic plans tomorrow, the same as yesterday

Although the Democrats’ public stance will be to let the dust from the bipartisan summit settle, several senior congressional Democratic sources concede to CNN that their plans moving forward on health care are not likely to be much different tomorrow than they were yesterday.

Democrats are actively looking into using the parliamentary short cut known as reconciliation to get a health care bill to the President's desk.

They are specifically exploring two issues: The ins and outs of how complicated process could work, and whether the votes are there in the Senate and House to execute this strategy.

END_OF_DOCUMENT_TOKEN_TO_BE_REPLACED

While many of you were at work or in school today, Democrats and Republicans were duking it out again over health care—this time at President Obama’s health care reform summit.

It lasted for a good part for the day, and there was plenty of drama and sparks. But did the summit actually push Congress any closer to passing a bill?

If you missed some or all of the debate, don’t worry, we’ve got your back. 360 MD Sanjay Gupta will be anchoring a special hour tonight, focusing on what some say is a make-or-break moment in the battle. We’ll give you all the highlights and key moments of today’s summit and tell you what it all means going forward—for your health, your wallet and your peace of mind.

END_OF_DOCUMENT_TOKEN_TO_BE_REPLACED

Heated partisan exchanges and in-depth policy discussions at the bipartisan health care summit on Thursday are unlikely to sway both parties in finding common ground, analysts said as the summit was going on.

One said the summit makes an argument against televising hearings. Another said it will reinforce doubts about whether Washington can resolve the health care impasse.

"I think it's reasonable to expect that an exchange like this is not going to change the public's skepticism about the way Washington works," said Michael Murakami, a visiting professor of government at Georgetown University.

We have met the enemy, and he is us. Debate on health care reform has once again become a miserable exhibition of seemingly irreconcilable differences, which President Obama is trying to address in his health care summit.

There is a path forward, and it starts with understanding that waiting for the government to lead an uncertain reform effort isn't necessary. 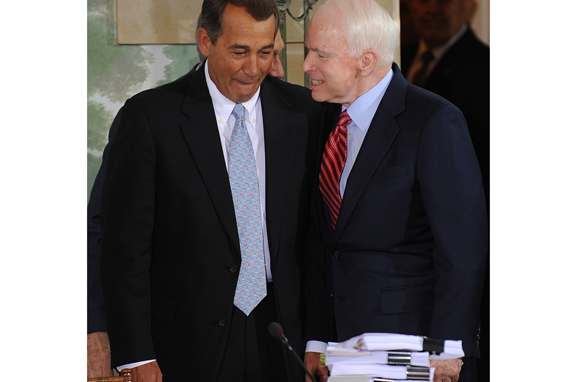