What should Tiger say?

Tiger Woods announced yesterday that he will issue an apology at the TPC Sawgrass Clubhouse in Ponte Vedra Beach, Florida, on Friday at 11 a.m. ET. All we know is that the apology will last around five minutes and that he will not respond to any questions from the media. Ever since the announcement, the blogosphere has been obsessed with whether we have a right to know what happened since Woods drove his SUV into a tree last November, took a leave of absence from professional golf, and apparently checked into a rehabilitation facility that treats sexual addiction.

Does the public have a right to know how Woods conducts his private life?

It doesn’t matter, and I’ll tell you why. Whether or not we are entitled to know about the demons that plague Woods, the best golfer in the world should use his worldwide platform to be a force for good and help others who are wrestling with the same problems he is.

END_OF_DOCUMENT_TOKEN_TO_BE_REPLACED

We have breaking developments on the pilot who crashed his plane into an Austin, Texas office. We take you inside the Conservative Political Action Committee convention in Washington, where Dick Cheney inspired the crowd. Plus, why 96 hours proves to be a crucial when it comes to tracking accused Taliban spies in Afghanistan.

[cnn-photo-caption image=http://i2.cdn.turner.com/cnn/2010/images/02/18/art.siu.roger.hill.jpg caption="Roger Hill was the U.S. commander in charge of Wardak Province in eastern Afghanistan for much of 2008."]

The more I learn about NATO’s 96-hour detainee rule, the more I wonder why military commanders and NATO politicians created it in the first place.

Under a NATO policy, troops can hold detainees for up for 96 hours. After that time, they must be released or turned over to Afghan authorities.

What I heard from nearly everyone I interviewed for this story is that the rule was developed in response to the scandal at Abu Ghraib prison. The world was watching, and no one wanted another humiliating display of detainee abuse. There had to be stricter rules when it came to detaining the enemy and there had to be a time limit on how long a suspect could be held. So, a small group of people agreed that 96 hours – or four days – was the magic number.

Nearly half of U.S. troops serving in Afghanistan are not operating under the U.S. military, but they are assigned to NATO. That means, nearly half of U.S. troops in Afghanistan are following NATO’s 96-hour rule. The soldiers we’ve interviewed say this rule caters to the enemy, and puts soldiers lives at risk. One former commander told me he would instruct his soldiers to “not bother” detaining the enemy anymore, because the 96-hour rule made it too difficult to keep someone locked up.

END_OF_DOCUMENT_TOKEN_TO_BE_REPLACED

We have new developments on the pilot who slammed his small plane into an Austin, Texas office. We've just learned two bodies have been found in the building's wreckage.

The pilot, Joseph Stack, left an apparent online suicide note where he expressed anger at the IRS. The building hit housed an IRS office.

"Like most Americans, I am shocked by the tragic events that took place in Austin this morning. This incident is of deep concern to me. We are working with law-enforcement agencies to fully investigate the events that led up to this plane crash.

My thoughts and prayers go out to the dedicated employees of the IRS who work in the Austin building. We will immediately begin doing whatever we can to help them during this difficult time.
While this appears to be an isolated incident, the safety of our employees is my highest priority. We will continue to do whatever is needed to ensure our employees are safe."

Iran's president has insisted it's nuclear program is for peaceful purposes, energy only. But in a draft report the U.N. doesn't see it that way.

We also are looking into the mystery assassination of a Hamas leader. Is Israel's intelligence agency behind the killing? Joe Johns is digging deeper.

Join us for these stories and much more at the top of the hour. See you then!

Watchdog: Iran may be working on nuclear warhead

Iran may be working on secretly developing a nuclear warhead for a missile, the head of the United Nations' nuclear watchdog agency said Thursday in a draft report.

It's the first time that the the International Atomic Energy Agency has issued such a strong warning about current Iranian nuclear activities.

The statement is in an IAEA draft report obtained by CNN. The report, dated Thursday, has not yet been approved by the board of governors of the IAEA.

Everything you need to know about the CPAC conference

Conservative activists from across the country spent the first day of the annual CPAC convention discussing policy, blasting the Obama administration and plotting a return to power in November.

Go here for information about the conference, including a list of speakers, what's on the agenda for each day and a list of sponsors. 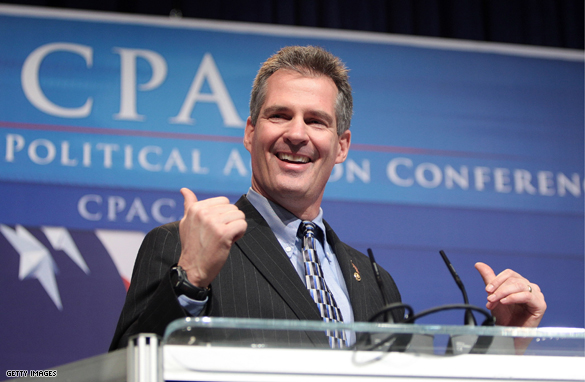 “Sen. Scott Brown announces to conservatives that he's going to name part of his body 'The Situation.'”

Video: Taliban not giving up