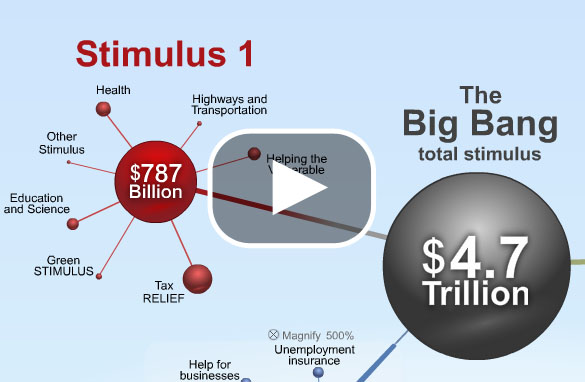 The government's efforts to rescue the economy were bold and complex. Here is an explanation of our methodology to break down stimulus into its component parts.

Q) What is the difference between "Stimulus 1" and "Stimulus 2?"

Stimulus 1 is the $787 billion American Recovery and Reinvestment Act, signed into law in February 2009. It contains a combination of grants, loans, direct spending and tax cuts aimed at creating jobs and alleviating the economic stresses caused by the recession.

Stimulus 2 is a group of extensions of programs enacted by stimulus 1 that were about to expire. It also includes other economic stimulus that was not in the ARRA bill.

Q) What was included in "Stealth Stimulus?"

A) Since the credit crisis erupted in 2008, the government launched several dozen programs aimed at rescuing the financial sector, the housing market and the overall economy. We included only programs that were launched by the Federal Reserve, Treasury Department or Federal Deposit Insurance Corp. since 2008.

Q) I have seen other values assigned to stimulus categories. How did you arrive at these numbers?

A) The Recovery Act is by far the largest stimulus bill ever enacted, and there are many ways to divide the thousands of different programs into groupings. We chose to follow the Congressional Budget Office's analysis of the bill, since CBO is an independent evaluator.

CBO grouped the bill's contents into 47 categories, and we further condensed CBO's groupings to seven main categories and 31 smaller parts.

Q) I thought some of these programs have yet to be funded, are winding down or have been paid back. What do the dollar amounts represent?

A) For the Recovery Act and its extensions, we listed the total appropriations for each category. For the Stealth Stimulus section, many of the programs were assigned credit caps that are unlikely to be reached, so we listed the highest value of government support during the life of each program.

Many of those programs are currently at their funding peaks, while others have been fully repaid.