360° Behind-the-Scenes Photo Gallery: On the ground in Haiti

A powerful earthquake rocked Haiti on January 12, damaging not only buildings and roads but the foundation of the Western Hemisphere's poorest nation, which has struggled under decades of coups, corruption and natural disasters. Photographers have turned their lenses to the devastation. Our team has been on the ground since the day after the earthquake, reporting on the aftermath. 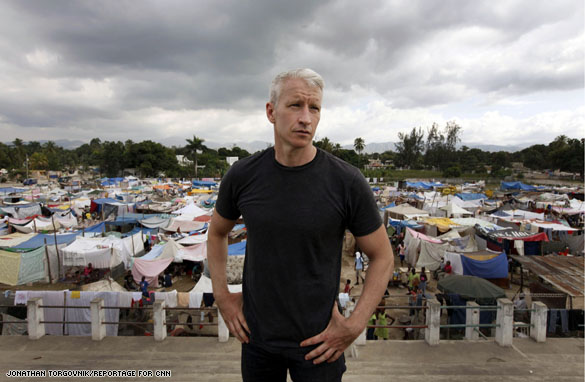 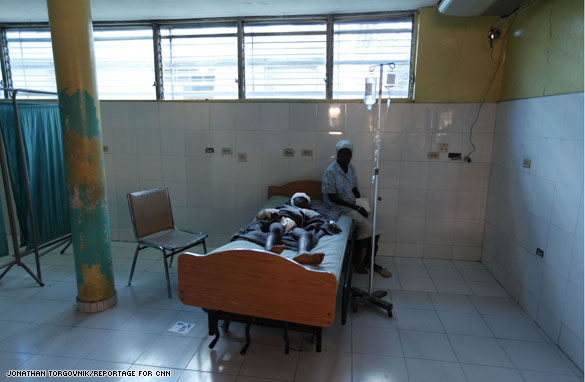 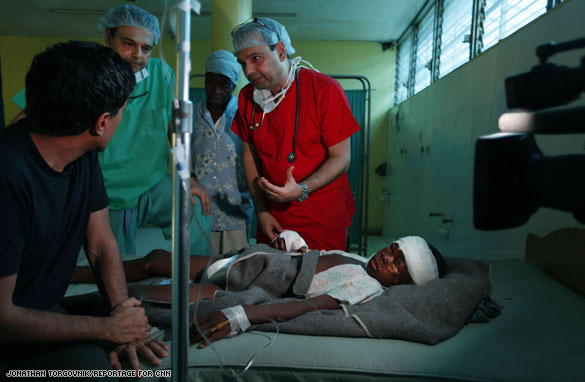 END_OF_DOCUMENT_TOKEN_TO_BE_REPLACED

10 days after the quake hit, two survivors are pulled alive from the rubble, a 22-year-old man and an 84-year-old woman. We'll have the latest on their conditions. Plus, the new disaster that could hit Haiti's survivors. And, George Clooney talks to Anderson about tonight's "Hope for Haiti Now" telethon.

Haiti Rescue: Saving the man who saved my life

I was in Haiti in October 2005 researching my book on modern-day slavery when I contracted a severe case of malaria. A young Haitian man named Bill Nathan, then 21, who manages a shelter for homeless boys in Port-au-Prince, took me in and attended to me daily as I lapsed in and out of consciousness. He found the chloroquine that kept me alive.

When the epic earthquake struck Port-au-Prince on Jan. 12, 2010, I saw a chance to repay the debt.

At 4:51 p.m. that day, Bill was on the seventh-floor garden on the roof of the Maison St. Joseph, a sanctuary of peace for some 20 boys who were either abandoned by their families or were child slaves, like Bill had once been. He had just ushered five of the boys down to their chores on the ground floor so that he could enjoy his one daily indulgence: a few moments of solitude in the garden's little gazebo, which was surrounded by potted plants, before the evening prayers.

Interactive Camera: A 360° view of Haiti 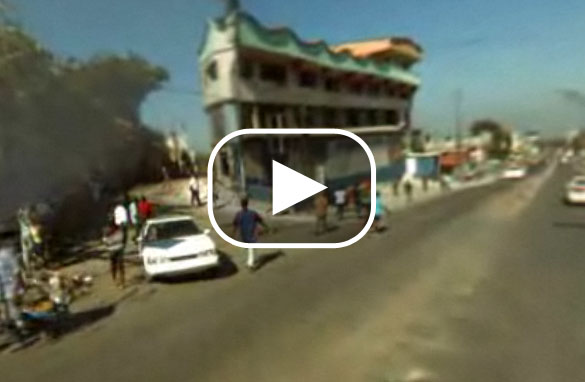 Use your mouse to click and drag around the video to change the view. You can also zoom in and out. Pause and explore at any time by pressing the play/pause button under the video to stop and look around. The video below was shot on Monday, January 18, at 9:52 a.m. EST in Port-au-Prince, Haiti.

[cnn-photo-caption image=http://i.cdn.turner.com/cnn/2010/LIVING/01/13/haiti.earthquake.how.to.help/t1larg.haiti.agencies.aid.cnn.jpg caption="Agencies are asking for moslty monetary donations for relief efforts in Haiti, for many are still assessing the country's needs." width=300 height=169]

Tonight on 360°, Anderson will have the latest developments from Haiti.

He's also taking part in the "Hope for Haiti Now" telethon, which airs from 8pm to 10pm ET on 25 networks including CNN. It's a star-studded event to help raise money for the victims of the earthquake. I'm watching them set up right now. I see a lot of big name Hollywood stars ready to take your call.

Tonight on the program we'll show you the potential health risks for the quake survivors. One public health agency reports there are about a million Haitians living in about 600 settlements. Tent cities, if you will. With so many people living so close together the conditions pose potentially serious health risks. Dr. Sanjay Gupta has the facts.

Meanwhile, Karl Penhaul is tracking the mass exodus out of Port-au-Prince. Aid officials estimate about 200,000 people have fled the capital.

We also have an update on the five-year-old boy, named Monley, who was pulled alive from the rubble on Wednesday. Anderson met Monley at General Hospital, where his uncle took him for care. The uncle and four of his friends dug Monley out with their barehands, no big equipment. It's believed Monley's parents died in the quake. Tonight, you'll see how Monley is doing now on day 10 of the disaster.

We also have updates on some of the orphans we've been telling you about, who have been lucky to be taken to the U.S., to live with their adoptive parents.

Join us for these stories and much more tonight on 360°.

Charities, companies, individuals and celebrities across the U.S. have been rallying together in the aftermath of the 7.0-magnitude quake that rocked Haiti last Tuesday, and their efforts are paying off.

As of Thursday evening - nine days after the earthquake struck - over $355 million in donations had been raised for relief efforts, according to the Chronicle of Philanthropy, a newspaper covering nonprofit organizations. The estimate is based on a survey of 35 charities contributing the largest amounts of money to Haiti.

"You've got a bad economy and a disaster outside of the U.S.," said Stacy Palmer, editor of the Chronicle of Philanthropy. "It makes sense that lots of people gave to the Katrina disaster in the U.S., but to give outside of the U.S. like this is remarkable, especially at a time with 10% unemployment."

The real question is whether this surge of giving will continue.

Arabs and Haiti ... aid trickles in

Determining how much Arab countries have contributed or pledged in aid to Haiti is a challenging feat. This is not unusual for someone who works the Middle East beat. The great majority of Arab governments and leaders are slow to react to events – natural disasters included. Most Arabs react quietly, some might say inefficiently, and others would argue it’s out of modesty that they don’t “brag” about their giving.

More than nine days after the devastating quake, it is fair to conclude that with the exception of a few Arab nations, there is not much to be proud of in terms of official Arab outreach to help the victims of the catastrophic earthquake.

Here is what we know about some Arab donations or pledges to Haiti:

Morocco, Kuwait and Bahrain pledged $1 million US Dollars each in aid to be delivered in various ways through each country’s Red Crescent organization.

Jordan, which lost 3 peacekeepers in the quake, has sent two planes of aid and a medical team to set up a medical field facility in Port-au-Prince.

Qatar and Bahrain sent in planes each loaded with tons of food and medical aid.