The people who steal hope from Haiti

In houses of worship all across the United States on Sunday, Americans are offering prayers for the people of Haiti, and making donations in the hopes of healing some of the hurt.

Over the weekend, President Barack Obama stood shoulder to shoulder with former presidents George W. Bush and Bill Clinton at the White House, the three of them asking their fellow citizens to join together in benevolence and kindness in the face of wrenching grief.

That's what Americans do in times of anguish: make an effort to help. We have seen heartening examples of this since the day the earthquake hit.

Yet there are some who see human suffering only as an opportunity - as a potential payday.

There are some who look at the faces of the dying and envision people to rob.

Editor's note: John P. Avlon is senior political columnist for The Daily Beast and author of the forthcoming "Wingnuts: How the Lunatic Fringe is Hijacking America."

On Tuesday, the eyes of the political world will be turned to Massachusetts where an unexpectedly close special election is being held to determine who will succeed Ted Kennedy in the Senate.

Conventional wisdom labels Massachusetts a liberal bastion, but this stereotype misses the mark. In fact, there are more independents in Massachusetts than Democrats or Republicans.

Take a look at the numbers: There are roughly 2.1 million independent voters in Massachusetts, 1.5 million Democrats, and 500,000 Republicans. Yes, Democrats far outnumber Republicans in the Bay State - especially in Boston - but there are more independents than Democrats and Republicans combined.

This is the key to understanding why the race between Republican State Sen. Scott Brown and Massachusetts Attorney General Martha Coakley, a Democrat, is so close. It reflects a broader dynamic occurring in American politics: Independents are the largest and fastest growing segment of the electorate.

CNN's Dr. Sanjay Gupta is on board the aircraft carrier USS Carl Vinson assisting in the care of a 12-year-old girl rescued from rubble with a serious head injury. The military sought Dr. Gupta's help, and he was taken to the ship by helicopter. He served as lead neurosurgeon, with assistance from two general surgeons. CNN has been told that the girl's condition is stable; she will be transferred to the USNS Comfort, and remain there until her family is found. Tune in tonight at 11pm EST for an update from Dr. Gupta. 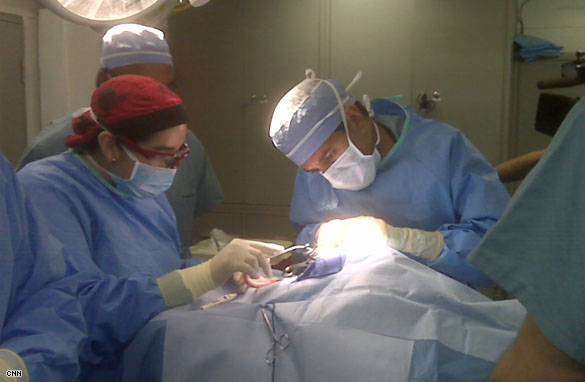 END_OF_DOCUMENT_TOKEN_TO_BE_REPLACED

Video: Camera on during Haiti earthquake

It could take 10 years to rebuild Haiti

The energy generated by the January 13 earthquake in Haiti was larger than that of the Hiroshima atomic bomb.

While many people were surprised to learn that Haiti is vulnerable to earthquakes because the last major earthquakes there were in 1761, 1770 and 1860, experts should have been taken that quiet period as an ominous sign.

A catastrophic amount of energy had been building up all that time, culminating in a 7.0 quake and many aftershocks that ruptured a segment of the fault 40 kilometers (24.85 miles) long. It affected an area roughly 100 km (62.14 miles) to the north and south, well beyond the capital of Port-au-Prince.

It may take a decade for Haiti to rebuild. This time, let's make sure the construction accounts for our acute awareness that earthquakes can happen in the Caribbean.

The question in many people's minds is why has the destruction been so catastrophic?

There are several reasons for the widespread damage to buildings, bridges and other infrastructure.

Reporter's Note: President Obama has paid tribute to the legacy of Martin Luther King Jr., and I do the same today in my letter to the White House.

I was thinking about this being Martin Luther King day and, as I am prone to do, I searched up some quotes. He said a lot of great things, of course, and they are wonderfully inspirational to read all these years later. But thinking of this, my daily letter to you, one in particular stood out.

“A genuine leader is not a searcher for consensus but a molder of consensus.”

Many times in the course of the first year of your presidency, I have wondered if that is an idea you should be keeping a little more in the forefront of your thoughts. You are, no doubt, aware that even many of your strongest fans have been puzzled and frustrated by a little too much of the “no drama Obama” routine. They have wanted you to be less professorial, and more dynamic in many ways. And who can blame them? On the campaign trail you were soaring, explosive, a hurricane of new ideas and promises of change. And yet, in office, suddenly you seem more like the eye of the storm; quiet, and little inclined to use your power.

That said, I can understand your reticence to do so. First, beyond campaigning, it doesn’t seem to be your style. Second, if you are trying to build consensus among all those hyper-inflated egos that populate Washington, giving them time to sound off, and voice their opinions, and at least appear to be leading the parade is a good way to get started. But there is a point at which that must also change.