There was a time that Pamela Hobbs believed justice had been served for her young son's murder.

But 16 years after the mutilations and killings of three 8-year-old Cub Scouts, including her son, she has more doubts than ever.

They were convicted of murdering her son, Stevie Branch, and two other neighborhood boys, Michael Moore and Christopher Byers. The second-graders' bodies were found bruised and mutilated in a West Memphis, Arkansas ditch; their arms and legs were bound by shoe laces.

When interviewed by media and documentary crews after the trial, Hobbs believed justice had been served. Misskelley and Baldwin had life sentences. Echols was on death row.

But recent developments - including new eyewitness statements and DNA evidence from the defense - have uprooted her faith in those prosecutions. Once a staunch believer that the teens were guilty, now she says the teens accused of killing her son in the West Memphis 3 deserve a new trial.

Zardari on the assassination of Benazir Bhutto two years ago

[cnn-photo-caption image=http://i2.cdn.turner.com/cnn/2009/images/12/28/benazir.bhutto.anniversary.jpg caption="Supporters light candles in front of a picture of slain former Pakistan premier Benazir Bhutto on the second anniversary of her death."]

Two years ago the world stopped for me and for my children. Pakistan was shaken to its core and all but came apart. Women everywhere lost one of their greatest symbols of equality. And Islam, our great religion, lost its modern face.

On Dec. 27, 2007, my wife, Benazir Bhutto, was assassinated. She was the bravest person I have ever known, and the second anniversary of her death is an appropriate occasion to reflect upon what she achieved for our country, and how her legacy must be preserved against those who would return Pakistan to darkness.

Twice elected prime minister of Pakistan, Benazir had an immense impact. She stood up and defeated the forces of military dictatorship. She freed all political prisoners. She ended press censorship. She legalized trade and student unions, built 46,000 primary and secondary schools and appointed the first female judges in our history. And she showed the women of Pakistan and the world that they must accept no limits on their ability and opportunity to learn, to grow and to lead in modern society.

The target of two assassination attempts by Osama bin Laden in the 1990s, Benazir repeatedly warned a skeptical world of the impending danger from extremists and militants. In her last campaign—even on the very day of her death, by the hands of such extremists—she mobilized and rallied the people of Pakistan against the terrorist threat.

Dear President Obama #343: The King of the Christmas trees...

Reporter's Note: President Obama remains on vacation and I remain committed to writing a letter every single day to the White House. However, in deference to the season, this week I am just writing little stories about Christmases past. Which, btw, is a lot more fun than nattering on about politics. What a surprise… 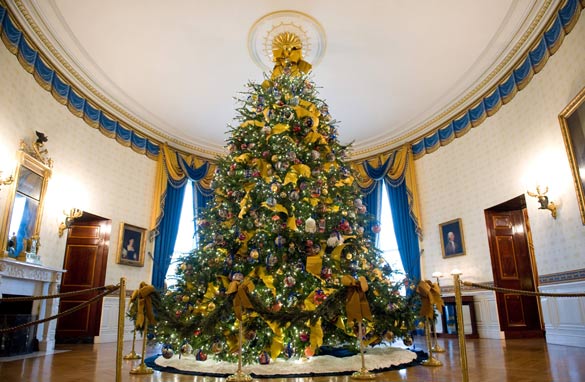 A few years after my wife and I moved to Colorado in the early 1990’s, as Christmas approached, I noticed a small item in the Rocky Mountain News, may it rest in peace. National Forest Service Christmas tree permits were going on sale the next day at their office on 6th Avenue. I thought it would make a great early gift to my wife, so I stopped by, paid my eight dollars for a little fluorescent pink tag and a map of the cutting area, and a couple of weeks later we were deep in the majestic Rockies, hiking through patches of snow to select a tree for our home.

The Forest Service used the program to thin smaller trees, letting the bigger ones grow more robustly, and simultaneously reducing the threat of a catastrophic forest fire, so it was pretty much a win, win, win. And that first season was simple enough. We wandered around for a half hour, enjoying the scenery and crisp, clear air; picked out a Charlie Brownish sapling, strapped it to our Subaru, and headed home.

By the next year, our tastes had refined a bit. We found ourselves pining (pun intended) for something that looked more like the cultivated trees that graced the lots back in town. That year we spent at least an hour searching the hillsides before making our pick, and even then we were not particularly happy with it.

And the next year, pure tree mania wrapped its bony fingers around us. Not only did we now want the best tree possible, but we also had a reason. Our first daughter had been born just months earlier, and certainly she deserved a great tree to start her Christmas memories. Yet, having embraced this ritual of trekking through the wilds to capture the spirit of Christmas in its natural state (many people think its natural state is a Walmart sales aisle, but they are mistaken) we were not about to give it up.

END_OF_DOCUMENT_TOKEN_TO_BE_REPLACED

Over the past several months of the health care debate, much focus has been placed upon the financial cost of health care reform, all of which is estimations, some of which is skewed significantly by those who wish to present a given story. I would like to suggest your organization begin a concerted effort to balance your reporting and begin including reports on the human cost, through news reporting about various people who were unable to get the health care that they needed, what the result of this lack of health care to them was, and how the people around them were affected.

I watched your CNN Heroes of 2009 last night. I was born and raised in Hong Kong, and came to US for College in '78. I often wondered why Americans use "hero" to describe football, basketball players & Hollywood stars. Glad u brought back consciousness to this country!