Documents: Heather Ellis was "completely out of control" 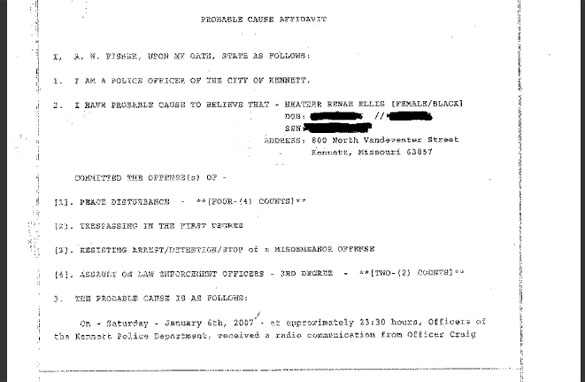 Program Note: Gary Tuchman will report live from Kennett, Missouri tonight where Heather Ellis's trial entered it's second day. Join us for all of the new details tonight on AC360° at 10 P.M.

On January 6, 2007 police were called to the Wal-Mart in Kennett, Missouri responding to a claim of an unruly women who, customers claimed, cut in line. Police officers responded to the call and found a woman who they reported as belligerent, screaming at the store cashier:

"As I arrived at check-out [cash register] number 13, I was immediately informed by – Kay McDaniel [On-duty Assistant Manager for Wal-Mart], that she wanted the black female that was yelling and cursing, to be removed, and escorted from the store, and off the property. I then informed the black female that, she had to leave the store and the property immediately, and cease causing any further disturbances. The black female turned and yelled, "I ain't going nowhere until I get my fucking change back" So I stood by while the cashier attendant handed the belligerent female her change."

Once approached by police officers "Heather Ellis continued to act in a very belligerent, angry, hostile, and aggressive manner."

"Heather Ellis continued to act in a very belligerent, angry, hostile, and agressive manner. Heather Ellis refused to comply with my repeated requests to calm down, and cease causing a scene and distrubance. Heather Ellis then turned her anger and agression toward me [Officer Fisher], and all other Police Officers which were present. Heather Ellis then began yelling, and cursing, and issuing derogatory comments toward this Officer. She then took her purchased itmes, which were in bags, and she began walking toward one of the exits of the building. However, Healther Ellis continues to yell, curse, and issue verbal insults toward this Officer. Heather Ellis would walk a little way, and then she would again turn and continue to yell, curse, and issue more insults. Heather Ellis continued to refused to comply with all repeated requests to just calm down, and stop continuing to cause a scene, and disturbance. I tried to convey to Heather Ellis [as best I could], that all she had to do was leave peacefully. However, it was incredible and abundantly obvious that Heather Ellis had absolutely no desire and/ or intention of complying with any and all request by this Officer."

According to the report, Heather refused to calm down even after leaving the store. Police reported she was "completely out of control."  She was later charged with four counts of peace disturbance, trespassing in the first degree, resisting arrest of a misdemeanor offense, and the assault of a law enforcement officer.

"Once it had become abundantly, and obviously clear that Heather Ellis had absolutely no desire and/or intentions of complying with all of my repeated requests, I then informed Heather Ellis that she was now under arrest. I then grasped the right arm sleeve of her black leather jacket, and I was attempting to deploy my handcuffs, in order to place Heather Ellis immediately became combative, and began fighting this Officer. Heather Ellis began swinging wildly toward this Officer when her arms and fist. Heather Ellis refused to comply with all requests for her to stop fighting, and stop resisting arrest. Heather Ellis continued to fight, yell, and curse. Heather Ellis was completely out of control."