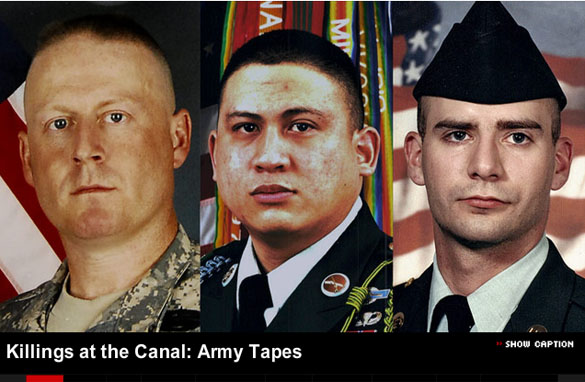 U.S. soldiers interrogated by the Army in the 2007 murders of four Iraqi detainees blamed a military policy they said made it too hard to detain suspected insurgents, a CNN investigation has found.

Soldiers questioned in the killings said the sergeant in command of their detachment ordered the suspected insurgents killed because Army rules made it too difficult to hold them.

"They're gonna be right back on the streets," one soldier put it.

CNN obtained an extraordinary 23½ hours of Army interrogation videotapes that detail the March 2007 executions of the prisoners by three sergeants who were attached to Alpha Company, 1st Battalion, 18th Infantry Regiment.

Dear President Obama #302: The bull in the China shop

Reporter's Note: President Obama, a big fan of the Chicago Bulls, is visiting China, where he is talking up ideas of cooperation. I am doing my part to get along with that part of the world by patiently waiting for a postcard or a call (ahem) and continuing my daily letters to the White House, which I assume will be forwarded.

Have you ever encountered someone who just did not like you, no matter how hard you tried to be a friend? (I mean, other than Rush Limbaugh.) There are such people in the world, whether you’ve personally encountered them or not. And the converse is also true: There are people whom you will automatically dislike, despite your best intentions. Anyone who says “I’ve never met a person I didn’t like,” just hasn’t met enough people.

I think this natural discord has something to do with conflicting personalities, brain types, competition, and of course whether you are a blue cheese or ranch kind of person. But is also has a heck of a lot to do with culture.

You made headlines over there in China by saying you don’t think the United States has to be a rival to that massive nation. As they say in the farming provinces every time someone suggests a march on Beijing, “Ha! Good one!”

END_OF_DOCUMENT_TOKEN_TO_BE_REPLACED

Morning Buzz: Killings at the Canal: The Army Tapes

Was it murder or battlefield justice? In 2007, there was an execution at a canal in Baghdad. Three decorated U.S. Army sergeants shot and killed four Iraqi detainees their platoon had taken into custody earlier that day. The soldiers are now serving prison terms at Fort Leavenworth. During interrogations the soldiers blamed military policy for making it too hard to detain suspected insurgents. We tell the story of the murders through one of the soldiers who was at the canal.

We also show you what the Army does not want released – part of the confession of one of the sergeants on an Army interrogation videotape. We obtained more then 23 hours of tapes in which interrogators interviewed the soldiers who were part of the mission that day in Baghdad. Don’t miss the first part of this 360° special investigation tonight.

Michael Scott, the Chicago Board of Education President, apparently shot himself in the head near the Chicago River before dawn yesterday morning. The school board president had said in August that he had been subpoenaed to testify before a federal grand jury investigating allegations of politically influenced admissions to top schools, but authorities did not immediately make any connection between the legal case and his death. Meanwhile, his death was met with disbelief by civic leaders and U.S. Secretary of Education Arne Duncan.

END_OF_DOCUMENT_TOKEN_TO_BE_REPLACED

With all the effort to smear Sarah Palin I am beginning to wonder if she has more influence on Americans than I thought. Interesting. Is the left afraid of her?

I am a breast cancer survivor of almost ten years. I found my lump back in 1999. Had I had a mammogram in my 40's, I would have been in a stage 1 and not stage 2. Estrogen related cancers aren’t hereditary, and therefore, woman should have mammograms starting at forty. I am cancer free