Preventing an epidemic: An eco-perspective

Sometimes the best perspectives come from far away places and few places are farther from Boston than Singapore, a small yet highly developed island nation in southeast Asia where I spent much of October.

The distance between Boston and Singapore is more than geographic, however. While I was away, H1N1 reclaimed the national spotlight back home. Not a day went by without mention of it in the news. It became the topic of conversation among doctors and patients everywhere. Well, almost everywhere.

While everyone in Singapore knew of H1N1, it was hardly the hot topic it had become in the States. During my stay, the main paper in Singapore ran just one article on H1N1 informing its readership that the first vaccine doses wouldn’t arrive for several more weeks.

To my surprise, the Singaporeans I met took this news in stride. One reason for this is that many Singaporeans perceive (and rightly so) that H1N1 is, in many ways, no worse than the seasonal flu that comes every year. In addition, Singaporeans have endured two much more deadly epidemics in the past decade, making H1N1 pale in comparison. In 1998, the first known outbreak of Nipah virus occurred in Malaysia and Singapore infecting 276 people, 105 of whom died. In this and eight subsequent outbreaks in India and Bangladesh the virus has earned the grim reputation of being one of the deadliest viruses known, with a mortality rate between 40 and 80 percent. Nipah virus resides in bats (the “reservoir”, as bats do not get sick when infected). Bats infect pigs, and exposure to infected pigs causes disease in humans.

Before President Obama releases his strategy for Afghanistan, he should think twice about fully re-embracing Hamid Karzai.

Despite noises in Washington to the contrary, the thin veil of legitimacy Karzai enjoyed before the August elections is now gone, and the damage to any counterinsurgency strategy is immense. True counterinsurgency operations require the building of confidence and trust among ordinary citizens and their government - trust that it will deliver on whatever small expectations the Afghan people have of Kabul. To the extent that confidence was ever present, it is certainly now shattered.

Do you have any questions about this ?

The president said people are “desperately searching for work” and that the government has “an obligation to consider every additional responsible step we can” to get people back to work.

He said the summit in December will bring together CEOs, small business owners, economists, financial experts and representatives from labor and non-profits groups to talk about how to get job creation back on track.

President Obama’s comments followed some encouraging signs out this morning on both the labor and housing fronts.

END_OF_DOCUMENT_TOKEN_TO_BE_REPLACED

A man has been arrested in connection with the disappearance of a 5-year-old girl in Fayetteville, North Carolina, authorities said today. The suspect, Clarence Darriel Coe, is accused of abducting Shaniya Davis, who was last seen inside her family’s mobile home on Tuesday.

Coe, 30, who was arrested early this morning, has a criminal record, said Lt. David Sportsman of the Fayetteville Police Department. He will be arraigned on one count of kidnapping this afternoon at the Cumberland County Detention Center.

[cnn-photo-caption image=http://i2.cdn.turner.com/cnn/2009/images/11/10/art.crime.amber.alert.missinggirl.jpg caption="Shaniya Davis, 5, was last seen by her mother on Tuesday morning."]

“During the course of the investigation, detectives were able to link Coe with taking her,” Sportsman told CNN. “Whether others were involved in it is possible. We are looking at everything and following up on multiple leads.” Sportsman added that the Amber Alert remains in effect and that authorities remain hopeful that Shaniya is alive.

END_OF_DOCUMENT_TOKEN_TO_BE_REPLACED

Reporter's Note: President Obama seems to be facing some conflict in his team over his decision on the future of U.S. troops in Afghanistan. Or rather, on his decision-in-the-works. That’s what I’m writing about in my daily letter.

The remnants of Hurricane Ida came rolling through town, so I guess you noticed the rain? I ask only because sometimes I get so busy following the news at my office, that I lose all track of the weather. I have a window, but there have been times when I just haven’t noticed if it is raining, snowing, blowing, or whatever until I leave the building. Anyway, I’m writing this at home with the rain still pitter-pattering outside and the dog asleep at my feet. My elder daughter’s high school chorus sang over at the University of Maryland tonight. My wife went, but I couldn’t make it; had to work late. But like I’ve said before, now is not the time to complain about a job. And that goes for you, too. Ha!

Speaking of work, I can’t help but be concerned about some of the reports coming out of your war room about the situation in Afghanistan. One advisor says send more troops, another says no don’t. Yes, yes, I know that every president wants everyone on his team to keep private conversations private, but in DC that’s like wanting a chocolate bar on the equator…it’s messy at best. And I must say that you are not making it easy for all your generals and advisors to keep their mouths shut.

END_OF_DOCUMENT_TOKEN_TO_BE_REPLACED

Gallery: Inside the apartment of Nidal Malik Hasan 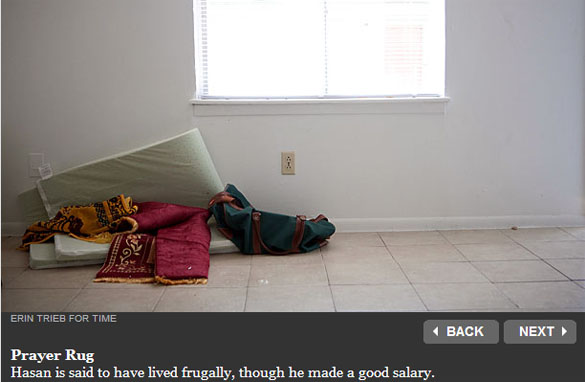 On November 5, 2009, Maj. Nidal Malik Hasan opened fire in the Soldier Readiness Center of Fort Hood, the most populous US military base in the world, killing 13 people and wounding 30 others. Take a look inside the home of the Fort Hood gunman.