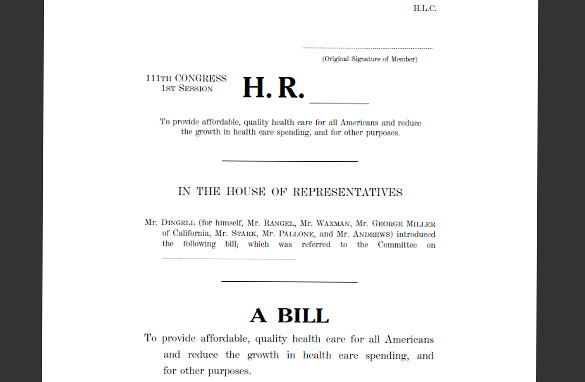 Editor's Note: While health care reform proposals are still being reconciled on the Senate floor, House of Representatives Speaker Nancy Pelosi unveiled the House plan Thursday at a rally on Capitol Hill in Washington D.C. Read the full contents of the proposed bill.

The nearly 2,000 page bill - a combination of three different versions passed by House committees - would cost $894 billion over 10 years and extend insurance coverage to 36 million uncovered Americans, according to House Speaker Nancy Pelosi.

It guarantees that 96 percent of Americans have coverage, Pelosi said. The figure is based on an analysis by the nonpartisan Congressional Budget Office.

Among other things, the bill would subsidize insurance for poorer Americans and create health insurance exchanges to make it easier for small groups and individuals to purchase coverage. It would also cap annual out-of-pocket expenses and prevent insurance companies from denying coverage for pre-existing conditions.