A U.S. contractor fights back during a Taliban attack. He shares his story tonight on 360°. Plus, why Sarah Palin may help a Democrat get elected on Tuesday. And, funny woman Wanda Sykes talks politics.

[cnn-photo-caption image=http://www.cnn.com/2009/WORLD/asiapcf/10/28/afghanistan.fighting/story.injured.gi.jpg caption= "An injured man is carried on the back of a policeman following the attack in Kabul on Wednesday."]

New details are emerging on the attack at a guesthouse for U.N. workers in Kabul, Afghanistan from a U.S contractor who saved 24 lives in the fire fight, but refuses to be called a hero.

The chaos began around 6 a.m. local time Wednesday when Taliban gunman disguised as police officers shot their way inside the compound. The fire fight lasted more than an hour. When it was over five U.N. workers, including one American, were dead.

Tonight you'll hear from the Chris Turner, the U.S. contractor who used an AK-47 to fight the intruders and save lives. He shares what went down inside the guesthouse.

We also have startling new numbers on the H1N1 virus in the U.S. The Centers for Disease Control confirmed today that as many as 5.7 million Americans were infected with the flu between April and late July of this year. The data provides the first picture of just how fast the virus can spread.

Meanwhile, the Dow had its best day in three months today thanks to a strong report on economic growth in the third quarter. The numbers helped boost investors confidence that the economic recovery is on track. But where are the jobs? We've got the raw data and the raw politics.

Join us for these stories and much more starting at 10pm ET. See you then!

Tonight on AC360, at 10pm eastern, I’ll be looking at the online campaign by folks who consider themselves “anti-vaxers.” These people are trying to scare others into not getting the swine flu vaccine. They say it could paralyze you. They say it hasn’t been tested on humans. They say it can cause cancer and autism and kill unborn babies. The swine flu vaccine back in 1976 did cause paralysis in some...and hundreds of families sued back then saying their loved ones died as a result of the vaccine.

What do believe? Are you planning to get vaccinated? What about your kids?

How UNICEF became a Halloween treat

I grew up under the impression that I was the best trick-or-treater in the whole wide world, because my grandmother invented it!

The whole thing was her idea! My grandmother and her friend UNICEF started it way back when she was born in the early 1500s. I thought UNICEF must be a pretty cool lady if she was hanging out with my grandmother.

Occasionally I'll ask people if they know about UNICEF, and sometimes they don't. But if I then mention the little orange Trick-or-Treat boxes on Halloween, suddenly everyone knows UNICEF.

We grew up carrying those Trick-or-Treat for UNICEF boxes on Halloween night, and now our kids do. These days, the candy bags may be fancier than pillowcases, and the costumes may come from the store, but the orange boxes remain the same.

John Boehner speaks about a healthcare reform bill during a news conference on Capitol Hill October 29, 2009 in Washington, DC. 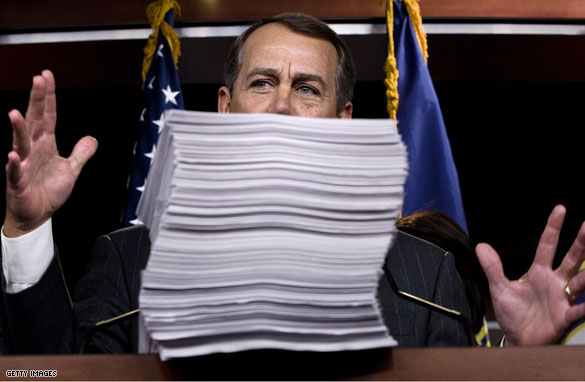 [cnn-photo-caption image=http://i2.cdn.turner.com/cnn/2009/HEALTH/10/13/h1n1.flu.young.adults/art.h1n1.vaccine.csl.gi.jpg caption="Keep up with all of the updates from the Center for Disease Control in the H1N1 swine flu pandemic."]

But that’s not all – the CDC has an entire H1N1 social media strategy. There are RSS feeds, mobile phone updates, text messages, Facebook and MySpace alerts, and Widgets.

See all the ways you can stay up-to-date with the latest H1N1 news.

The DNC is targeting Sarah Palin directly, encouraging supporters to attack the former Alaska governor on Facebook in order to "debunk her lies."

On its new web site, the DNC asks supporters to call out Palin when she uses Facebook to transmit what the committee says are falsehoods.

Check out the DNC's new website - and its campaign to 'Call 'em Out' - on the site.

Billy Corgan Blogs About Swine Flu, Refuses to Get Vaccinated

“I am not a doctor, and I am in no way suggesting that you should follow any medical advice from me,” Billy Corgan writes at the top of a blog post about swine flu. What follows is nearly 850 words of Corgan spitting conspiracy theories on his Everything From Here to There blog regarding the H1N1 virus.

Smashing Pumpkins’ frontman has a central thesis — that the illness was “created by man” and driven by a “propaganda machine” powered by fear. “I for one will not be taking the vaccine. I do not trust those who make the vaccines, or the apparatus behind it all to push it on us thru fear,” Corgan writes. “This is not judgment; it is a personal decision based on research, intuition, conversations with my doctor and my ‘family’. If the virus comes to take me Home, that is between me and the Lord.” Corgan also argues against a potential Massachusetts state law that will require residents of the state to receive the vaccine. “Soon, you won’t even have the choice to live OR die as you wish!”