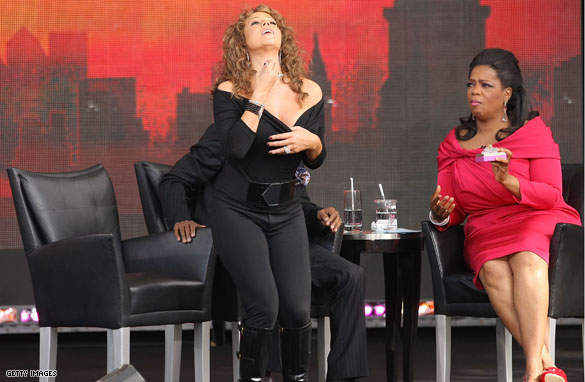 “Yeah so its really simple actually, when I want to hit those high notes, I just press this button here.”

Oprah looks like she can’t wait for Kanye to come and interrupt whatever Mariah Carey is doing.

Video: Inside the Garrido House

Five states posted jobless rates above 12% last month, according to the Labor Department. Michigan had the highest unemployment rate – at 15.2%, followed by Nevada at 13.2% and Rhode Island at 12.8%. 27 states and the District of Columbia reported increases, 16 states registered rate decreases, and 7 states had no rate change. The news offers more confirmation that whether or not the recession is over, the jobs picture is still bleak.

Poppy Harlow in today’s Breakdown takes a look at big bonuses and golden parachutes on Wall Street – a year after the collapse of Lehman Brothers, it’s looking a lot like business as usual. Poppy talked to FDIC Chairman Sheila Bair who says the bonuses seem “absolutely unseemly.” And now a huge crackdown into bank compensation may be in the works. The Wall Street Journal reports this morning that the Federal Reserve is proposing broad oversight of any policies which encourage risk among bank employees. The Fed would have the power to amend or reject the executive compensation policies.

END_OF_DOCUMENT_TOKEN_TO_BE_REPLACED

Herewith three examples within a single speech - the now-famous Obama-Wilson "you lie" address to Congress on health care - of Obama's relationship with truth.

Wonderful. The president seems serious, veto-ready, determined to hold the line. Until, notes Harvard economist Greg Mankiw, you get to Obama's very next sentence: "And to prove that I'm serious, there will be a provision in this plan that requires us to come forward with more spending cuts if the savings we promised don't materialize."

Congressman Joe Wilson is in his home state of South Carolina delivering a response to his "You lie!" comment during President Obama's speech to Congress last week. Our political panel will focus on the politics of this speech and how it affects the current health care debate. And today, First Lady Michelle Obama spoke out in Washington on health care supporting President Obama's plan. She focused on insurance reform as a woman's issue, and gave her most outspoken remarks yet on health care. Erica Hill will be looking at the First Lady's involvement in this very contentious debate. What do you think of this hot button issue?

END_OF_DOCUMENT_TOKEN_TO_BE_REPLACED

New Haven Police Chief James Lewis on Thursday described the killing of Yale graduate student Annie Le as an instance of "workplace violence," but he did not elaborate.

Raymond J. Clark III, 24, has been charged with Le's murder and bond has been set at $3 million, Lewis told reporters at a news conference.

Thursday morning, police arrested the Yale lab technician in the strangulation of Le, whose body was found in the wall of an off-campus research building.

While the motive is still unclear, Lewis said police do not consider the killing a domestic crime and are treating it as the result of "workplace violence."

Lewis said there are growing numbers of incidents throughout the country "where things occur in a work environment among employees," Lewis said. "And sometimes it's difficult to tell."

Michigan led the nation in unemployment, with a rate of 15.2%, while Nevada was next at 13.2% and Rhode Island was third at 12.8%. California and Oregon were tied for the fourth spot, each with unemployment at 12.2%.

In August, 27 states and the District of Columbia recorded month-over-month unemployment rate increases, while 16 states posted a decrease in unemployment and seven saw rates hold steady.

It's a black, white, and gray thing

Sometimes, even in the jaded world of been-there-done-that journalism, when I’m flipping through the headlines with a world-weary glance, I still see something that makes my eyes pop like a cartoon character. And this week it is a Rasmussen poll addressing this thorny issue of race and politics.

Or I suppose I should say it’s thorny if you see it that way.

Let me explain. The Rasmussen folks posed a question to the effect of: Do you think opposition to President Obama’s health care reform plan is based on racism? 88 percent of Republicans and 78 percent of unaffiliated voters said “No way.” But among Democrats that number plummeted to just 39 percent. The poll goes on to say that 22 percent of them take it much farther, saying the opposition to health care reform is primarily racist, and the rest of the Dems at least suspect that could be so.

In simple terms: Many Republicans and independents say health care reform is in trouble because people don’t trust the policy. Many Democrats say it’s because Barack Obama is black.
END_OF_DOCUMENT_TOKEN_TO_BE_REPLACED