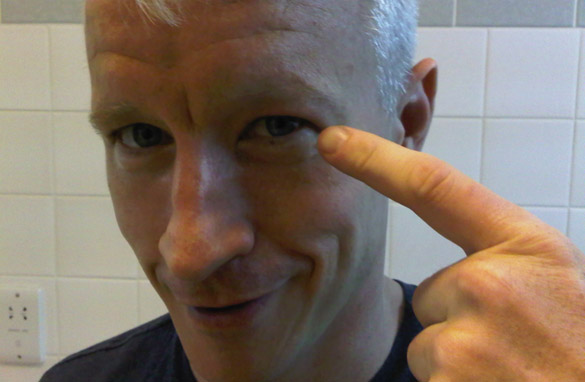 Anderson was bitten by something during the night. Here's his picture for proof.

@andersoncooper: just interviewed the President. We walked around Cape Coast Castle with him, it's a former dungeon for slaves heading to America.

@andersoncooper: we walked through the "door of no return," the portal thru which slaves were sent to the New World. Talked about the ...

@andersoncooper: ....impact of it on him and his family. Outside hundreds have gathered to get a glimpse of Obama....

@andersoncooper: ..its one of those songs that's catchy at first, but gradually drives you insane..like 99 Luftballoons. Remember that one?

@andersoncooper: forgot to mention. During the night I got bitten by something on my left eyelid.. Maybe a spider. When I awoke, my eyelid was ....

@andersoncooper: my eyelid had swollen nearly shut. Not the kind of thing you want to have happen before interviewing the President...

@andersoncooper: In my mind I looked like Sylvester Stallone in "Rocky". In reality i looked more like Mathew Broderick in the movie "Election."

@andersoncooper: luckily, by the time the President arrived it had gone down significantly. "Not so bad," he said to me as he sat down.

@andersoncooper: now its nearly back to normal..still a little swollen. I took a picture for the ac360.com blog. I'm about to go to bed.

@andersoncooper: I think I'm going to sleep with the lights on.

Reporter's Note: The President of the United States has plenty of advisors; educated, experienced souls who have dedicated their lives to public service. However, for some reason, he has made it clear that he would also like advice from the rest of us. I find that confusing, but then he probably finds my response confusing too: a letter a day to Pennsylvania Avenue.

It took a pretty good while, but it appears you are finally facing what every president faces at some point after he has unpacked his suitcases at the White House. Your poll numbers are falling.

My first advice: Take a deep breath. Relax. You are still pretty much the most popular politician on the planet, and certainly the most popular one here. Your Democratic buddies in Congress are about as well-liked as a wet sock in the face. And the Republicans hardly have time to even plan a bounce back, amid the torrent of debris from all their self-destructing colleagues. And don’t get me wrong. People still like you; in big numbers and in a big way. It’s just that the polls suggest they are getting a little shaky in their faith that you know what you are doing.

So my second advice: Watch “The Hustler.” I’ve mentioned in recent weeks that my family is screening a stack of classic movies this summer, and that I’m going to keep you abreast of our progress each Saturday, and this week I thought this great tale of a conflicted pool shark was particularly appropriate. (BTW, yes, I know that I’m leaning heavily on the Paul Newman flicks, but I can’t help it. I just love his work and usually love his characters.)