A bittersweet journey in Eastern Tennessee 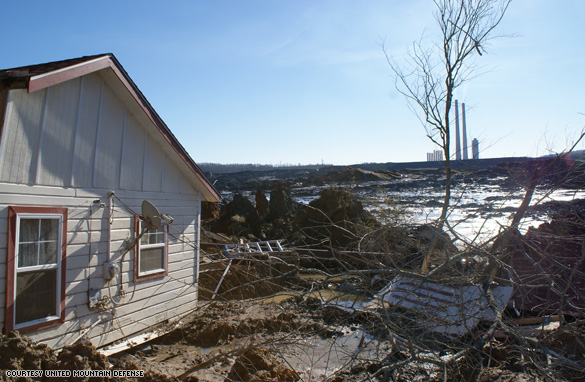 The coal ash spill more than six months ago left this area of Eastern Tennessee devastated.

Being asked to help the people of Tennessee who have been so devastated by the coal ash disaster has been bittersweet.

It is bitter because it is so shameful that a community should have their homes and lives torn apart by a corporation that could have taken steps to avoid this impending disaster, which they knew was imminent. The Tennessee Valley Authority (TVA) knew of breeches and leaks but did nothing to stop them.

It is bitter because people are experiencing sickness since the disaster and are fearful for their children and families; who wouldn’t be?

One billion gallons of ash, debris and other muck laden with arsenic and radionuclide came roaring down upon them in the night, and they are now having difficulty breathing and have developed skin rashes, debilitating headaches and respiratory problems. What's worse is that they are being told that these materials can’t harm them, yet their bodies tell them otherwise.

There are millions of gallons of uncontained coal ash still in this area. It is bitter because it is summer, a time when in years past, the lakes and rivers were filled with boaters and families fishing. The valley echoed with the laughter of children. Yet now, those sounds of laughter and joy have been silenced. The community and its people are fearful and have become prisoners of their own homes.

Working with this community is sweet for only one reason; I have had the honor to get to know these people. Members of this community either grew up in or moved to this area because they love nature and the great outdoors and believed that they had found a little piece of heaven on earth.

They could enjoy some unspoiled place where nature thrived in their own backyards, where they could enjoy the laughter of their children as they played and where they could appreciate the soothing sounds of nature. But then, on December 22, the roars of disaster rolled over and through their neighborhood leaving their hopes and dreams of the future extinguished nearly as fast as one could blow out a match.

So why did I go to Tennessee when members of the community asked me to go? Because together with the law firm of Weitz and Luxenberg I knew that we could help them to organize, to remember that they have rights and to keep their hopes alive that one day soon their community could be returned to them. The people of Harriman, Kingston and surrounding areas are strong, proud people and it is critical that their voices not be silenced.

This community needs to be protected as the pieces of their lives are slowly put back together, and I hope that we can learn from this disaster about how to STOP future communities from being devastated before the unthinkable happens. It is a disaster waiting to happen all over again.