An inside look at North Korea 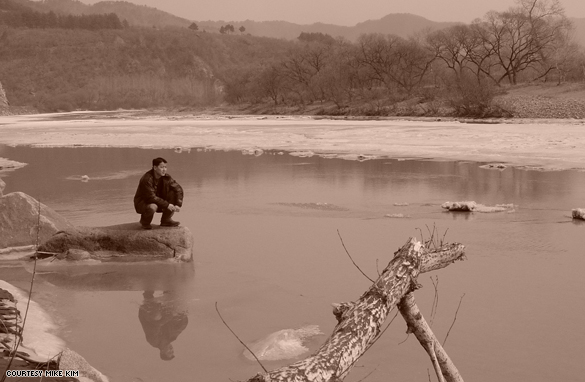 Mike Kim at the Tumen River which straddles North Korea to the right, and China to the left. Kim would visit this area two to four times each month.

"In Escaping North Korea," one of the few Americans granted entry into the secretive country, Kim came to know North Korea and its people intimately. Posing as a student studying Tae Kwon Do, Kim recounts his four years from 2001-2003 on the border where he was running an underground railroad, helping North Koreans escape.

His North Korean friends entrusted their secrets to him as they revealed the government’s brainwashing tactics and confessed their true thoughts about the repressive regime that so rigidly controls their lives. Civilians and soldiers alike spoke of what North Koreans think of Americans and war with America. Children remembered the suffering they endured through the famine. Women and girls recalled their horrific sex-trafficking experiences. Former political prisoners shared their memories of beatings, torture, and executions in the gulags."

Read excerpts of his book, Escaping North Korea: Defiance and Hope in the World's Most Repressive Country, here.

There are major food shortages in the North Korean prisons, which should come as no surprise. If there isn’t enough food in the homes, there certainly isn’t going to be enough food in the prisons. Mr. Yang, a former prisoner, says, “People there are so hungry that they would eat the maggots in the outhouses and even earthworms in the manure….I saw it in my very own cell. Some people would get so hungry that they ate centipedes.”
(p. 104)

“In the beginning, there wasn’t enough food. There weren’t enough spoons either, so they would pace only a certain number of spoons per group. I sat at the very front. All the newcomers had to. The front was the coldest, because the guards left the windows open for ventilation. Those who sat near the windows felt the freezing wind blowing on them. Only small spoons were given because the guards feared the prisoners might commit suicide by eating a spoon.” [quote from a North Korean prison survivor] (p. 105)

Women, children, and the elderly are all subject to beatings and torture. Mrs. Lee, a refugee, explained, “When it comes to beatings, they don’t look at men and women differently.” Ms. Lim, another refugee, added, “However, it is only the men who are electrocuted with cattle prods. Women aren’t electrocuted, but we are kicked, hit with sticks, and have our hair pulled out until we bleed.” Another former prisoner showed me a bald spot on the right side of her head. “I was hit on the head repeatedly with a hammer,” she said. (p. 109)

North Korean National Security Police captured Missionary Lee and imprisoned him for five months. He was starved, beaten, and tortured, and he suffered unbelievably in prison; he nearly died more than once. Several of the guards were students in tae kwon do and judo and used him as a punching bag to practice whenever they got bored.

Editor's Note: Mike Kim is the founder of Crossing Borders, a faith-based organization that provides aid to North Koreans. After helping refugees for the past four years, he now travels and speaks widely to raise awareness of their plight. Kim resides in Washington, DC, where he is a full-time MBA student at Georgetown University's McDonough School of Business.Recently got his MBA from Georgetown, lives in DC but will be doing us from Seoul, where he had a speech planned.