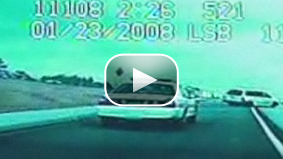 Video of the car chase and police striking the suspect.

Was Mr. Warren trying to run down the officer he swerved toward and struck while the officer was placing spike strips on the road? As a former police officer and prosecutor, I believe the evidence shows he was. The pursuing officers were close and had a clear view of him apparently trying to kill a uniformed colleague.

It would be interesting to hear the police radio transmissions to understand the limits of what the cops knew and what was in their minds. Whether captured on audio tape or not, the cops are probably wondering why this man seems so desperate to avoid capture. Is he wanted? Armed?

The driver's utter disregard for the safety of innocent motorists and pedestrians suggests that if they catch up with him, he will not acquiesce. How much force will they need to use on him? At significant risk to themselves, the cops manage to bump him off the road causing his vehicle to overturn and Mr. Warren to be ejected.

At that moment, Mr. Warren appears almost lifeless. Is he? Are there any other situations the cops deal with in which a seemingly lifeless person ends up killing or injuring someone? Absolutely.

A crucial police academy training exercise involves teaching cops how to approach someone they've just shot. After a careful approach the suspect, though grievously wounded, should be handcuffed. This is based on previous scenarios in which wounded people, sometimes in their dying moments, harm or even mortally wound officers.

Officers strike Mr. Warren over approximately 10 seconds. Then, almost in unison, the cops retreat, seemingly satisfied that he is in fact not a danger to them.

Did the officers strike the injured Mr. Warren believing he could be a threat or was this a punishment beating? Perhaps they are the only ones who know for sure. But based on police pursuit history, officers - and police supervisors - have to do everything they can to limit the amount of force used to arrest the offender and defend themselves, particularly when a colleague has been injured or the chase itself has put the officers at great risk.

Emotions run high at such times. The cops have to try to control themselves. The greatest complicating factor is that, at the end of the day, though the cops get a bunch of tools and training to help them do their job, they cannot ditch the imperfections and passions of their humanity, and they do not enjoy extra-human abilities to divine the exact moment when a resistant suspect decides to comply.

- The Birmingham police department should indicate whether this chase accords with department policy. In most American cities, police will not pursue for all but the most serious crimes. There is just too much at stake and too many examples of chases ending with lethal results for the chased, the cops and innocent folks.

- Then there is the reality that more and more police work is being brought into American living rooms thanks to ubiquitous surveillance equipment. Hopefully, people will have a better understanding that using force on people is a core function of police work that differentiates their jobs from civilian occupations. Perhaps this will make Americans leery about involving the police in so many areas of domestic life. And policing too often continues to be a hot button topic that allows us to glimpse larger issues of race relations.

- Finally, will police chiefs and mayor's have the stomach needed to defend police operational judgments even when the actions of officers "look bad"? We are starting to see police chiefs quickly weigh in on controversial police videotapes even before officers have a chance to defend themselves. The nation as a whole seems to be driven more by the visceral, and less by the contextual, with snap judgments being offered up about the good guys, the bad guys and the victims.

We will all ultimately be in deep trouble if the first question at police headquarters and city halls becomes, "What are the political implications for the chief and the mayor?" These events have to be looked at through the eyes of the officers on the ground and it would be nice for some public officials to take responsibility for their police while acknowledging that the cops are out there often doing our dirty work for us.