Editor's Note: The Office of National Drug Control Policy released a report today from the University of Mississippi's Potency Monitoring Project, which shows levels of THC in marijuana are highest since the analysis of the drug began in the late 1970s. The Potency Monitoring Project is funded by the National Institute for Drug Abuse (NIDA). We'll be digging deeper tonight on AC360° at 10 p.m. ET and Dr. Sanjay Gupta will answer questions about the drug. 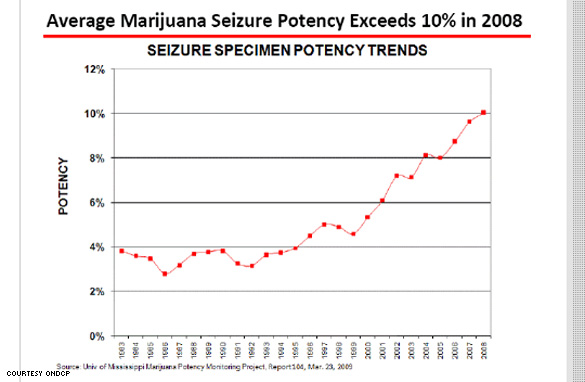 According to the latest data on marijuana samples analyzed to date, the average amount of THC in seized samples has reached a new high of 10.1 percent. This compares to an average of just under 4 percent reported in 1983 and represents more than a doubling in the potency of the drug since that time.

As of March 15, 2009, the University of Mississippi's marijuana Potency Monitoring Project has analyzed and compiled data on over 1,500 marijuana seizure specimens including cannabis, hashish, and hash oil samples confiscated by law enforcement agencies during 2008.

An analysis of marijuana seizures at Southwest border ports-of-entry shows increasing levels of potency, from a median potency of 4.8% in 2003, to 5.2% in 2005, to 7.3% in 2007. This indicates increasing potency in marijuana is not only seen from expected domestic sources, such as indoor cultivation, but from traditionally low potency non-U.S. sources crossing the Southwest border.