Why the pope's shoes are raising eyebrows

[cnn-photo-caption image=http://i2.cdn.turner.com/cnn/2009/WORLD/meast/05/09/jordan.pope.visit/art.nebo.afp.gi.jpg caption="The pope looks out from Mount Nebo, where the Bible says Moses looked over to the promised land."]

The last time a pope’s shoes were in the news, it was shortly after Benedict XVI’s election four years ago. A rumor made the rounds that the new pope had replaced the scuffed loafers of his predecessor, John Paul II, with stylish new Prada footwear – a rumor, by the way, eventually denied by the Vatican.

Today in Jordan, the pope’s shoes raised eyebrows for another reason … specifically, because he didn’t take them off.

The setting was the Hussein bin Talal Mosque in the Jordanian capital of Amman, the second mosque Benedict has visited as pope. (He went to the famed Blue Mosque in Instanbul, Turkey, in 2006.) It was only the third time a pope has ever entered a mosque, with the first coming with the late Pope John Paul II in Damascus, Syria, in 2001.

Because these events are so rare, and in light of other episodes in which perceived slights to Muslim sensitivities have had lethal consequences, the day’s symbolism was closely scrutinized. When discerning eyes realized that the pontiff had not taken off his shoes before entering the mosque, which is widely considered a sign of respect in the Islamic world, heart-rates went up in fear that the pope had committed a gaffe that might unleash new tensions.

END_OF_DOCUMENT_TOKEN_TO_BE_REPLACED 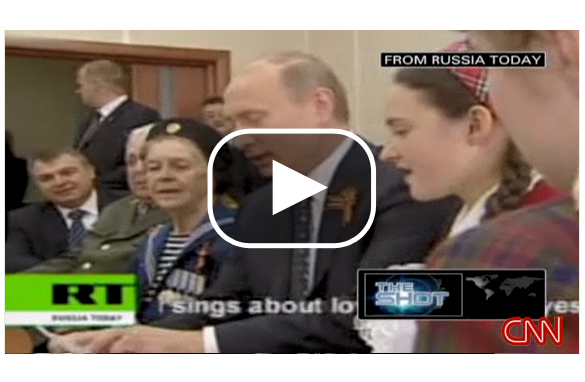 A softer side of Vladimir Putin, participating in a sing-a-long.