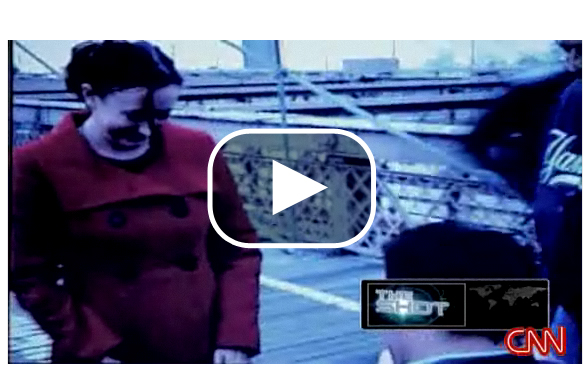 A guy proposes to his girlfriend on the Brooklyn Bridge. He drops the ring and braves oncoming traffic to retrieve it.

Reporter's Note: President Barack Obama has asked for advice from average Americans on how to run the country, so I’ve been writing a letter a day to the White House. Not sure if it’s helping, but I’m certainly helping the office paper industry.

I loved that question at that town hall meeting in France: Do you ever regret having run for President? And I was intrigued by it, because I have wondered the same thing about every President.

At first it’s all ceremony and excitement. New Presidents roll out their plans, assemble their teams, put photos of their wives onto the desk, and we all get accustomed to how they do business. Then in a heartbeat, it’s all old hat. Their speeches start sounding the same, their policies seem stale, Ed Henry starts badgering the fellow, and about that time the new chief exec starts looking like a guy who has accidentally wandered into a La Leche League meeting.

And your answer sounded like you are about halfway through that door.

You seemed uncomfortable, tired, a little melancholy, maybe even wistful for the old days when you were just a Senator hanging out at the Field Museum and shopping in the Loop. When you talked about sitting at a French café watching the passing crowd, it seemed like you were lapsing into the kind of nostalgia most folks don’t enjoy until their ‘70’s.