Defrocked for too much faith 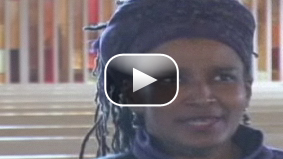 Ann Holmes Redding on her faith.

It’s not always easy reconciling your life with your religion.

Ann Holmes Redding knows all about that.

Until yesterday Redding was an Episcopal minister. She was defrocked by the church - but not for lack of faith, exactly.

That’s because Redding is both a practicing Christian - and Muslim.

When I met Redding she said her double faith allowed her “to see the same mountain from different points.”

She became interested in Islam during an interfaith service in Seattle three years ago where she worked as a minister.

Redding saw similarities in the way both religions worshipped one God and she was drawn to how Muslims “surrendered themselves” to their faith.

While Christianity worships Jesus as the Son of God, Islam sees him as one of many prophets. In fact, the Koran names 25 prophets, including Moses, Lot and John the Baptist. It also has an entire sura, or chapter, named for the Virgin Mary.

Redding’s friends and colleagues were less enamored by her conversion to Islam.

Some she said doubted her sanity. Her church laid down an ultimatum: abandon Islam or the priesthood.

For Redding the decision was an impossible one, the same as being asked to choose between two of your children.

In a statement announcing Redding’s removal from the priesthood the church said she is a woman of “utmost integrity” but that a minister cannot be both Christian and Muslim.

It’s unclear as well how accepted Redding will be by other Muslims. When I went to an Islamic prayer service with her some of the people there said while they respect the journey she is undertaking they hope it ends with her fully converting to Islam.

One theologian said that while Redding’s case is unique for a minister it is not entirely unheard of in the wider population. Increasingly, he said, people are “mixing and matching” ideas they like from very different religions and creating their own very personalized faiths.

When you talk with Redding you can tell from her knowledge of the Bible that she was a minister for nearly 30 years and that she is deeply wounded that she has to be forced from the priesthood.

But she hopes her experience shows that two religions that are often in conflict with one another share common ground. “Christianity and Islam can live together inside of me,” she said. “Not always peaceably. There’s tension. For sure there's tension. But it suggests we can do that in larger and larger circles.”