Brad Pitt and us – working the halls of power 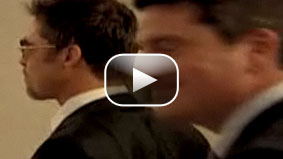 Brad Pitt walks in the Capitol building on Thursday.

Bumped into Brad Pitt on Thursday. Which was nice.

We've got the video to prove it. If you think it doesn't really look like your typical celebrity picture, here's what was going on: Joe Johns, photographer Jeremy Moorhead, and I, were prowling the tunnels of the Capitol's underground subway system, accosting Senators and Members of Congress to ask them about health care (that'll be our story on the show tonight). While Joe and I were mumbling about where to go next, the ever-vigilant Jeremy spotted Brad Pitt coming towards us, flipped on the camera and got the shot.

Some people tell stories about meeting famous people and blurting out something really dumb... not Joe. Completely focused on our mission, Joe called out, "Wanna talk about health care?"

Yeah... As you can see, it didn't really work. Brad - and his security entourage - were gone. And then a throng of determined-looking admirers (congressional interns??) came out of nowhere, chasing him. The Capitol police cut them off in the tunnel.

In fact, the issue Mr Pitt was in town to talk about was his charity work in New Orleans. He had meetings at the White House and with Speaker Nancy Pelosi about his "Make it Right" project to build affordable and environmentally-sustainable housing for low-income residents of the Lower 9th Ward in New Orleans who lost their homes because of Hurricane Katrina. At least that's the official word on what was discussed....he managed to pull off most of these meetings pretty much under the radar, which is why we were happy to get this video.

As we relived the moment later, Joe was saying that when he used to be in charge of the Radio and Television Correspondents Association, it could be really difficult to book stars to perform at the Association's annual dinner, because so many Hollywood types didn't want to share the stage with President Bush. Now, with the Obamas and their star factor, maybe we'll be bumping into a lot more A-listers around town.

Finally, because I've been asked a million times today what he looked like in person, I'll just say this: in this job, you get to meet a fair amount of famous people. Usually, when you meet them in person, they look pretty normal. Brad Pitt may have been in an unglamorous basement tunnel, in the same place where you can run into any number of Senators and they hardly stand out, but he still looked glamorous. Or maybe you had to be there.