Sonic booms and at least one fireball in the sky were reported in Texas on Sunday, less than a week after two satellites collided in space and a day after the Federal Aviation Administration asked U.S. pilots to watch for "falling space debris," authorities said.

There were no reports of ground strikes or interference with aircraft in flight, FAA spokesman Roland Herwig said.

Herwig told CNN the FAA received no reports from pilots in the air of any sightings but the agency recieved "numerous" calls from people on the ground from Dallas, Texas, south to Austin, Texas.

Bill Clinton's thoughts on the economy 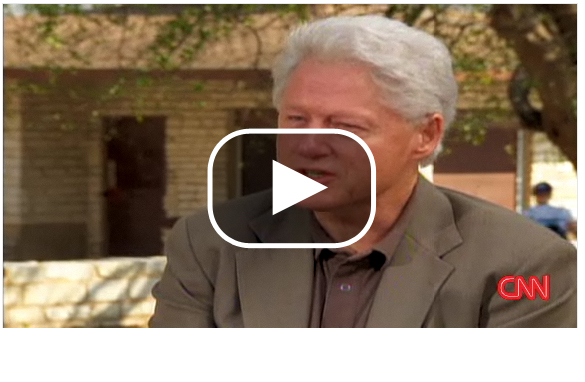 The test of time

The first historical ranking of Presidents has been released since Mr. Bush left office last month, and his initial score is not a kind one. The C-SPAN Historians Presidential Survey puts Bush in the bottom tier of Chief Executives, at #36, slightly ahead of Millard Fillmore.

But Bush has made it clear he wasn’t worried about the first judgments on his presidency. At his final White House news conference, he said “there is no such thing as short-term history.”

END_OF_DOCUMENT_TOKEN_TO_BE_REPLACED

For better or for worse, the biggest economic stimulus bill in history- ringing in at a whopping $787 billion dollars- has been passed. The bill is a hodgepodge of government spending, long-term investment, and tax breaks that Congress HOPES will get the economy back on track.

Supporters say the bills' provisions will kick start the job market, push stock prices higher, and restore confidence in the housing market. 3.6 million people have already lost their jobs during this recession, consumer and business spending have just about ground to a halt, and housing prices continue to drop. The stimulus bill has its work cut out for it.

END_OF_DOCUMENT_TOKEN_TO_BE_REPLACED

Pakistani government does deal with Taliban on sharia law

Pakistani government officials announced Monday an agreement with the Taliban to allow strict Islamic law, or sharia, to be implemented in parts of North West Frontier Province.

It marks a major concession by the Pakistani government in its attempt to hold off Taliban militants who have terrorized the region with beheadings, kidnappings, and the destruction of girls' schools.

The government will recognize sharia for the entire Malakand Division, which includes the Swat district - a two-hour drive from Pakistan's capital, Islamabad - the chief minister of North West Frontier Province Amir Haider Hoti announced Monday in a news conference. Islamic law is already being practiced in the area, where the Taliban have control.

'Sexting,' child pornography, and your teen

In the past few weeks, 6 Cape Cod teens, and 3 teenagers from Mansfield, MA have been caught “sexting,” or sending sexually explicit material via cell phone texts. In all of these cases, police are considering charges of child pornography, which is a felony.

Consider this real-life scenario described by a parent I know. A boyfriend and girlfriend (14 years old) were evidently experimenting with their sexuality, and the girl thought it would be a nice treat to text a topless photo of herself to her beau. The girl then asked the boy, repeatedly, to return the favor with a photo of his private parts. Young love is fickle, and when this couple finally broke up, the girl forwarded the photo of her ex-boyfriend’s private parts to her friends, and so on. So the boy, feeling betrayed, also forwarded his explicit picture to his friends. Who’s guilty in this scenario?

The appointment of a Saudi woman as a vice minister in the country's government is a "first step" for women's rights in Saudi Arabia, but "more serious changes" are needed, an outspoken advocate said Sunday.

"It is something really great, and we are very proud of our king that he took this decision," Wajeha al-Huwaider told CNN. "And I think it's going to be the first step toward the reform that he promised."

King Abdullah on Saturday appointed Norah al-Faiz to serve as the newly created vice minister for women's education as part of a major Cabinet reshuffling. It is the highest rank a woman has achieved in the Saudi government.

The aircraft crashed into a home in Clarence Center, New York, near Buffalo, on Thursday night, killing all 49 people aboard. A 61-year-old man in the house died also, but his wife and daughter survived.

In 150 lucid pages, Bruce Riedel gets inside the heart of Al Qaeda and shows us how to kill it. The Search for Al Qaeda understands Al Qaeda for what it is: a set of highly effective leaders who have created a compelling narrative (based partly on American missteps in the Muslim world) and a remarkably resilient organizational structure that seduces a small group of young Muslims to destroy in a highly strategic manner.

But one which – with the right vision, message and strategy – can be defeated.

The $787 billion economic stimulus bill approved by Congress will, for the first time, provide substantial amounts of money for the federal government to compare the effectiveness of different treatments for the same illness.

Under the legislation, researchers will receive $1.1 billion to compare drugs, medical devices, surgery and other ways of treating specific conditions. The bill creates a council of up to 15 federal employees to coordinate the research and to advise President Obama and Congress on how to spend the money.

The program responds to a growing concern that doctors have little or no solid evidence of the value of many treatments. Supporters of the research hope it will eventually save money by discouraging the use of costly, ineffective treatments.