Sam the Koala: Safe and Smitten 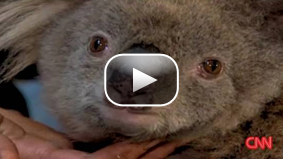 Sam, the koala, gets a visit from the firefighter that found her in a burnt Victorian forest.

The losses from Australia’s worst-ever wildfires are mounting: the official human death toll is now expected to climb as high as 300.

An even grimmer picture is emerging for wildlife.

Rescue officials say millions of animals likely died in the inferno that scorched the state of Victoria. Hundreds of burned, stressed and dehydrated animals – from kangaroos to wombats to wallabies and beyond - are being cared for at shelters across the region.

Sam, a koala, is one of the lucky ones. She was found by a fire patrol on Sunday and catapulted to fame by a heart-rending photograph showing a firefighter pouring water into her mouth. She’s getting treatment for her injuries at the Mountain Ash Wildlife Shelter, where she’s found more than human compassion. According to the Associated Press, the furry female has caught the eye of a male koala, nicknamed Bob. The two are reportedly inseparable. Sam has also been reunited with her rescuer. Click on Sam’s picture above to watch a video of their reunion.

Survivors like Sam can’t describe the trauma they’ve suffered but at least they are getting help. You can learn about efforts to care for the injured animals at Wildlife Victoria’s website.

Today, firefighters in Australia were still battling about 35 fires. That’s actually good news, since just days ago more than 400 wildfires were burning out of control.

The devastation is sobering. The question remains: Who and where are the criminals believed responsible for setting some of the fires?