Will it play in Peoria? 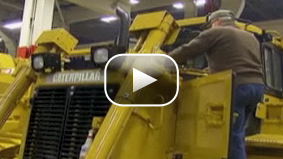 CNN's John King visits Peoria, Illinois where many people were laid-off from Caterpillar.

I want $1 for every time on Thursday a reporter, commentator or anchor wonders aloud how President Obama and his plan to stimulate the economy are “playing in Peoria.”

The President will go to that Illinois city and visit the Caterpillar Tractor Co. before traveling on to Springfield to commemorate the 200th bicentennial of President whose name adorns millions of license plates in the “Land of Lincoln.”

For those curious, the name Peoria came from an American Indian tribe in the Illinois confederacy of tribes. A commonly found translation of the name from the Miami-Illinois language is “he comes carrying a pack on his back.” Tribal websites recount how disease and wars forced the Peorias to relocate from Illinois westward to Kansas and finally into Oklahoma.

Have you wondered where that phrase, “Will it play in Peoria,” originated?

William Safire claimed, in his “On Language” column in the Sept. 29, 1985, Sunday New York Times, that he could “cite chapter and verse on its coinage.” According to Safire, “John D. Ehrlichman, who in 1968 was the chief of Nixon advance men, used the phrase to mean "go over well in a non-elitist environment" in a "school" he ran for the organizers of parades, hoopla and local welcome in cities to be visited by the candidate.”

Safire’s claim brought a rebuttal letter to the Times from David H. Remer, of Newport, Calif., who recalled hearing the question “Will it play in Peoria” decades earlier on the Jack Benny and Fibber McGee and Molly radio programs. “When I asked about the origin of this expression, my grandmother explained that Peoria was known on the vaudeville circuit as one of the toughest towns in which to get a laugh, and consequently, if a new act or comic skit were likely to "play in Peoria" it would play, or be successful, anywhere,” Remer wrote.

Peoria likewise was a popular test market; if a new product would “play in Peoria,” it could be sold successfully to the rest of the nation.

References to playing in Peoria are cited in such diverse entertainment as the Marx Brothers movie “A Night at the Opera;” the Bugs Bunny cartoon “What’s Up Doc?,” as Elmer Fudd’s vaudeville troop opens in Peoria and the television show “I Love Lucy,” as Fred and Ethel reminisce about opening their vaudeville act in Peoria. Peoria even got a mention in the current animated series “Futurama.”

A book titled “Place Names in the Midwestern United States” quoted Don Marine, who taught and directed theater in Peoria, as saying, “If one were to choose the city in the United States most victimized in jokes and anecdotes by theatrical personalities, the selection of Peoria, Illinois, would be a popular, if not likely choice. Two of the more popular quips are: "Say, I hear you got married. How did that ever happen?" "I was playing a split-bill in Peoria–and it rained!" and "Have you ever played Peoria?" "Peoria? Oh, yes—I spent four years there one night!" The widespread appeal of this verbal maligning by comics, actors and other performers suggests Peoria as a paramount example of the dull, banal and provincial theatrical road stop. But the popularity of the "put down" suggests as well that the city possesses a theatrical heritage of considerable longevity.”

“There is no such thing as Illinois humor,” declared an article written for the Illinois Humanities Council. “This is not to say that Illinoisans don't have a sense of humor. But there is no style of humor that is uniquely Illinoisan, no body of jokes directed at the state per se, no tradition of performance that owes to, and conveys, the peculiar placeness of Illinois. In humor as in so much else, Illinois is two places, each with its own style of humor. There is what might be called Downstate Illinois humor–bucolic in origins and reference, most naturally expressed in parable told over the cracker barrel or the stove–and Chicago humor, whose natural idiom is the wisecrack delivered across a bar in a saloon.

“No Illinoisan was more adept at Downstate humor than Abraham Lincoln. Humor was a crucial element in both the public and the private man; his law partner William Herndon reports reliably that Lincoln was known as a jokester and storyteller around central Illinois well before he was known as a lawyer or politician. He did not tell funny stories for the sake of fun but to make a point, and thus favored tales with what Herndon called "the necessary ingredients of mirth and moral," the article said.

President Obama may not be the jokester that Lincoln was, but at the recent Alfalfa Club dinner in Washington he made light of an irony reaching back to Lincoln’s time. “I am seriously glad to be here tonight at the annual Alfalfa dinner. I know that many you are aware that this dinner began almost one hundred years ago as a way to celebrate the birthday of General Robert E. Lee. If he were here with us tonight, the General would be 202 years old. And very confused.”

While in Peoria, President Obama is unlikely to reference the comedy of Peoria’s native son, Richard Pryor, who did his own rendition of an African-American as President more than 30 years ago on his television show (clips available on the Internet; likely not considered “politically correct”).

It remains to be seen Thursday how President Obama plays in Peoria, but at $1 a mention I would expect to stuff my wallet.