Images from the arrest

[cnn-photo-caption image=http://i2.cdn.turner.com/cnn/2009/WORLD/africa/02/11/piracy.arrests/art.pirate.intercept.usnavy.jpg caption="Seven men suspected of trying to pirate a tanker raise their hands before their arrest in the Gulf of Aden."]
The U.S. Navy has captured seven suspected pirates in the Gulf of Aden, the first arrests by a U.S.- led task force set up to curb the rampant piracy off the Horn of Africa, a Navy spokesman said Wednesday.

Sailors from the cruiser USS Vella Gulf arrested the men in the western Gulf of Aden after a distress call from the 128-meter (420-foot) tanker Polaris. The tanker reported men aboard a small skiff were attempting to board the ship using ladders, but its crew removed them before the would-be hijackers could get aboard, the Navy reported. 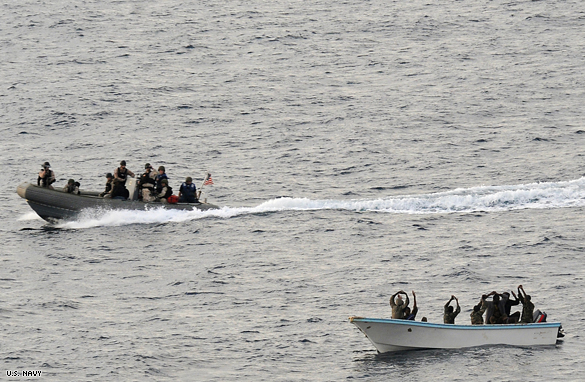 The Vella Gulf found and boarded the skiff, and the tanker's crew identified them as their would-be hijackers. The prisoners were taken aboard the Vella Gulf, the current flagship of the task force now patrolling the western Gulf of Aden, and eventually will be transferred to Kenya for trial, said Lt. Nate Christensen, a spokesman for the U.S. 5th Fleet. 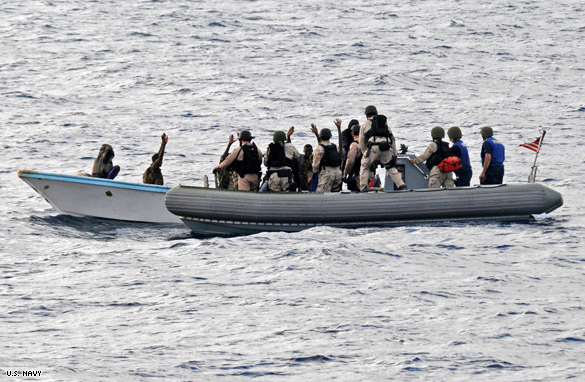