Hi everyone. I'm writing from the Huffington Post ball at the Newseum. It's very cool! The first ever interactive ball. If you're online at home you can log in and talk to folks who are here at the ball. There's a giant computer hanging from the ceiling here as part of the décor, but also computer stations. There are too many celebrities here to count!  We've seen Robert De Niro, Dustin Hoffman, Sting, Sheryl Crow, Ben Affleck and the list goes on. Sheryl Crow is supposed to perform and so is Sting and Will.I.Am.

The celebs are getting bombarded by the party-goers.  Just chatted with John Cusack. He told me he came because he's a good friend of Arianna Huffington and an Obama supporter. He's also been blogging from the party with folks at home. I also just talked to Dustin Hoffman. We even took a picture together.  John Mellencamp just brushed by me to go outside on the patio and smoke a cigarette. Sting is setting up a table next to us. I've never seen a party like this. Will write more as the night continues. This feels like Hollywood, not Washington DC.

Check out the photo below. It might be blurry, that's definitely actor John Cusack. 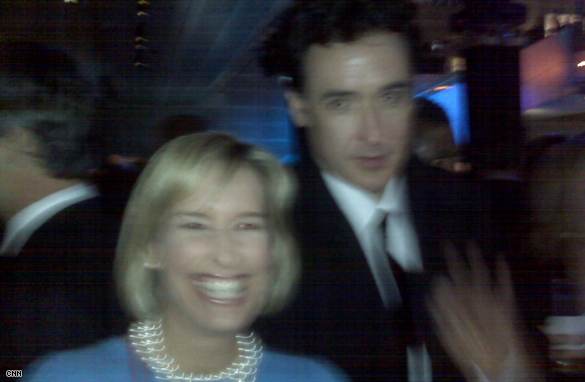