Horse riders get ready for the inaugural parade 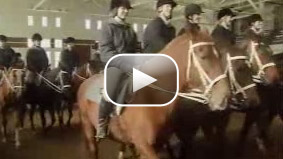 Watch this video of the riders at Culver Academies rehearsing for the inaugural parade.

I have been a member of the Culver Academies Horsemanship staff for more than 21 years. Although I have had the opportunity to prepare Culver horses and riders for six Presidential Inaugural Parades (1981, 1985, 1997, 2001 and 2005), the preparation for the inaugural parade of President-elect Barack Obama stands out for me.

More than 100 days ago, long before we received the official invitation to participate in the parade, Culver riders were saddling up their mounts, riding in formations and practicing their horsemanship skills in hopes of an invitation. These riders were hoping that they would have the opportunity to follow the tradition of past Culver riders and participate in the most patriotic parade in our country.

Prior to the November 2008 election, there was excitement among the students and staff because no matter who won the election, history would be made! Would we be riding for the first female vice-president or the first African-American president? Students debated the candidates’ platforms and were engaged about discussing the politics of our nation.

On election night many students stayed up late in the dorms (past the official lights-out time) glued to the TV watching the results roll in. Enthusiasm was palatable when students found out that their generation was witnessing history and a change for the country.

We began practicing for the parade the Sunday following the election and the chatter among the 100 riders was about how important it would be to be invited to this parade! They wanted to do our school and country proud by riding down Pennsylvania Avenue. That very day the students practiced giving an “eyes left”, a military salute to the next Commander-in-Chief, the first African-American President in history!

On December 8, the Culver Academies Black Horse Troop and Equestriennes received the official invitation to the Presidential Inaugural Parade and the word spread around campus like lightening through email. As a student told me, “Wow! Of all Inaugural Parades that Culver has participated in, I get to be in the most historic one of all times!” I think that says it all!