[cnn-photo-caption image=http://i2.cdn.turner.com/cnn/2009/images/01/15/art.bellandcallebs.jpg caption="Jena 6's Mychal Bell sits down to talk to CNN's Sean Callebs about his latest struggles, including a shoplifting charge and a suicide attempt."]

Mychal Bell says he felt pressure to be perfect after his part of 2006's "Jena 6" assault case was over. When police alleged last month that he wasn't, the Louisiana teen took his Christmas money and sought to buy a gun to kill himself.

Distraught after being arrested on suspicion of shoplifting and battery, the 18-year-old Bell says, he pointed the gun at his head and pulled the trigger.

The gun misfired, and he aimed at his chest and tried again. The bullet ripped through his body, and he fell to the floor of his grandmother's home in Monroe on December 29.

"It just got to the point where I just couldn't take it anymore," Bell, who is recovering from the wound, said in an interview to be aired on CNN's "Anderson Cooper 360°."

In December 2006, Bell - a star running back for Jena's football team - was one of six black teenagers charged in adult court with attempted murder and conspiracy charges in the beating of a white classmate in Jena, Louisiana, an incident that followed months of racial tensions in the community of about 3,000 people.

The "Jena 6" case drew national attention from civil rights groups that said the charges were excessive, and an estimated 15,000-plus people turned out for a September 2007 rally in Jena on the youths' behalf.

The charges were eventually reduced. Bell, only 16, pleaded guilty to battery in a juvenile court and moved to Monroe. There, for the past year, he attended high school, chasing a 2009 graduation and - although Louisiana wouldn't let him play football at his new school - hopes of a college football scholarship.

'Jena 6' figure tried to commit suicide, police say
"I just wanted to show everybody that I really wasn't the type of kid that everybody was making me out to be," said Bell, who worked out with his school's team even though he couldn't play in games. " Nobody will ever be perfect, but it's like that's where my mind was. You need to be perfect. ... 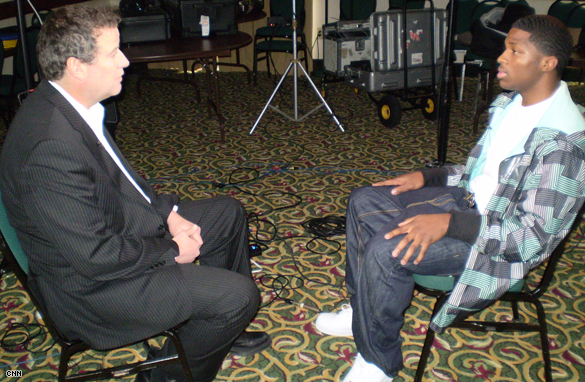