#%$& you and the Labradoodle you rode in on 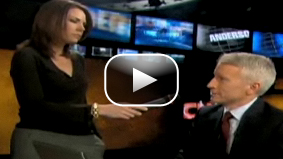 Next thing I know he’s telling Erica Hill that I have a collection of them stuffed and mounted over my mantle.

So allow me to set the record straight: I don’t have a “pathological disdain” for Labradoodles as Mr. Cooper alleges.  All I’m saying is that – as far as I can tell – “hypoallergenic” actually means “pistol-wielding thug.”

I remember the first Labradoodle my dog Sammy and I ever encountered.  He was bouncy, curly-haired and answered to the name Charles Manson.  Without fail every time we passed this dog he would try to chew Sammy’s face off.  Without stopping, the dog’s owner would mutter an apology, burp and continue on his way to the Art Garfunkel look-alike contest.

The Labradoodle is, as you probably know, in the news because it is one of the two breeds being considered by the Obamas.  The other being the Portuguese Water Dog, the breed favored by Senator Ted Kennedy.

Now, I’m not advocating one breed over another, I’m just saying that if the Obamas choose a Labradoodle let’s hope for their sake they don’t get a descendent of the particularly amorous fellow who each morning at the dog park approaches Sammy with a snifter of cognac and a Barry White album.  There’s nothing quite like starting your day by watching a four-legged arthritis sufferer named Harvey try to canoodle with your dog.  It’s the Folger’s Crystals commercial from hell.

In fact, every Labradoodle Sammy and I have ever encountered has tried to either murder her or engage in public romance.  I know, if only Nancy Grace had a pet segment.

It must be said, of course, that all dogs have their flaws.  And my dog is far from perfect. She is known to enjoy a carton or seven of Virginia Slims.  And, yes, it’s true that at the stroke of noon she wobbles on over to the liquor cabinet saying “well, it’s 5:00 somewhere.”

But she’s not all bad.  I mean, in her defense, why would that guy have left the keys in his Audi if he didn’t want her to take it?  And, sure, she spends her free time soliciting foreign donations for the Clinton Foundation but, dammit, she’s passionate about climate change.

So despite Anderson Cooper’s campaign to paint us as Labradoodle-hating elitists, Sammy and I want to make it clear:  Our anecdotal experiences notwithstanding, we think highly of them and understand from our friends that Labradoodles do indeed make great pets.  And if one is lucky enough to move into The White House, we wish him or her well.

Just keep your grubby paws off of Air Force One.