Cyber vigilantes – on the prowl 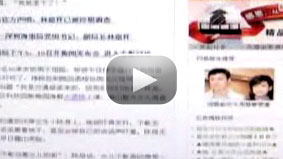 It all sounds very creepy: Human Flesh Search Engines. That’s what they call the cyber vigilantes who trawl the Internet looking for information to publicly shame those who they believe have done wrong. Think black and white movie, angry mob with burning torches and pitch forks. It’s not unique to China, but it certainly happens here a lot.

Lin Jiaxiang ended up on the wrong side of the mob.

Earlier this year, security camera video was posted on line, showing him allegedly trying to force an 11 year old girl into a restroom at a restaurant. Internet users, or netizens as they’re called here, were further outraged when a transcript emerged of an argument between Lin and the girl’s father.

"How much money do you want, just tell me I'll give you the money," he says. "I have the same seniority as your Mayor. So what if I tried to grab a little child's neck."

The netizens went to work, and the human flesh search engine kicked in. It’s a bit like the old town square: someone has one piece of information, which leads to another piece from someone else, which leads to another, until there’s a clear picture of the person involved. Lin was identified and fired by the government within a month.

“It’s basically smart mobbing” according to Rebecca McKinnon, a high profile blogger and Assistant Professor at Hong Kong University. “People get together in a chat room or across a series of chat rooms and blogs and trade information to track somebody down.”

An official statement said Lin had caused "an extremely negative influence on society with his uncontrolled remarks and behavior.” But a police investigation found insufficient evidence to bring charges against him.

In many ways, the angry cyber mobs, says McKinnon, are a response to the frustration that many ordinary Chinese feel when it appears that justice is not being done.

Right now, the cyber mobs don’t appear to be targeting the central government. Analysts say that would be crossing a red line, but almost everything else is fair game.

Two years ago, video surfaced on the net of a woman killing a kitten. The netizens identified her through databases, social networks and photo analysis – even finding out her high-heeled stilettos used to kill the kitten, were bought on eBay.

She eventually confessed, blamed it all on a failed marriage and lost her job.

The internet gumshoes were at work a few months ago exposing a scam by a farmer who claimed he photographed a rare southern China tiger. The tiger turned out to be a cutout placed in the bushes. State media reported the farmer received a suspended jail sentence for trying to claim a reward.

But the case of Wang Fei is one in which the cyber vigilantes may have gone too far.

His wife committed suicide last year, apparently devastated by Wang’s extramarital affair. Before she took her life, she left all the details on a blog.

Wang’s lawyer, Zhang Yanfeng says the netizens then targeted Wang – searching out all the details of his life: where he worked, his address, the name of the other woman.

“He became like a golden fish in a tank, with no privacy. They used the “human flesh search engine” to violate his privacy . . . many netizens attacked him on the net insulting and discrediting him.”

Wang, and the woman with whom he had the affair, lost their jobs after their employer was inundated by angry phone calls.

And it didn’t stop there.

When Wang moved in with his parents, their home was vandalized.

According to Zhang, “some netizens went to where his parents were living and gave out flyers. They said he was no good, and painted on the doors of his parents’ apartment saying he caused his wife’s death.”

McKinnon says unruly mobs are not new to China, only now they roam the internet. Think Red Guard during the Cultural Revolution, using violence to defend Chairman Mao.

“There are lots of mobs in China as there always have been. And now they’re on the internet too. But what this says about Chinese young people…I mean there’s a large number of Chinese young people who’re online, who perhaps have time on their hands”

Wang is now suing the three websites which made his private life so public. The websites deny any wrong doing, arguing all the information about him was publicly available.

The case is now with a three judge and panel and a decision has been pending for months. But controlling an unruly mob in cyber space might just be beyond the reach of any real world court.