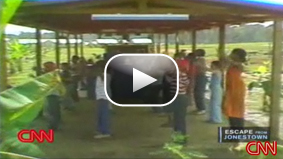 Frankly, I did not want to do the story. It always has been a very ugly event in anybody’s history. PBS’ Stanley Nelson did a great documentary only a couple years ago, and there was no reason to try to repeat his fine work.

But I flew out to San Diego to meet with the two dedicated individuals who run The Jonestown Institute out of their own house as the repository of all the worthwhile research, maintained quite objectively.

I was aware there were survivors of the airport ambush and I thought CNN might be able to tell a different story – one of human survival in the most trying of circumstances - by focusing on those who did manage to live.

By then, I had done enough reading that I also knew of the group who walked away separately that morning. With the Jonestown Institute’s help, I began looking for Leslie Wilson, then 21, who had carried her 3-year-old son to safety in a sheet on her back.

It took another month to find Leslie, not in California where I had been looking, but rather, living in the same suburban Atlanta county as I do, only a few miles away. Her story is remarkable. What’s more, she and my wife have become quite good friends.

The Parks family was the first family to ask to leave Jonestown with Congressman Leo Ryan the day he was murdered on the nearby air strip, and the only church member killed there was Patricia Parks, the mother in the family. I wanted to reach out to them. I kept finding wrong addresses. Finally, the right one popped up for the 12-year-old daughter who was the youngest survivor of that ambush. I wrote her – I don’t like to make cold phone calls, they come as a surprise and there’s no way to make it a personal conversation – and so I send letters first to explain what we’re trying to do.

Tracy Parks phoned me the very next morning, and said she had been praying for someone to take her back to Guyana to say goodbye, after 30 years, to her mother.

CNN’s Soledad O’Brien stood with Tracy at the side of that air strip as she left flowers, a cross and candles as a memorial to the mother whose funeral she had been unable to attend.

The moving moment for me, however, was seeing a network anchor down on her knees in the dirt, digging with her hands, to help Tracy bury a small memorial stone on the site.

Those are the glimpses one rarely gets into the true humanity of the people in television who work to bring stories like these to the public at large, and I do hope this humanity and concern does come through in our documentary, “Escape from Jonestown.”