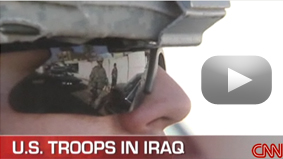 CNN's Arwa Damon reports from Baghdad about the troops in Iraq on Veterans Day.

Its 9:30pm in Iraq’s capital on veterans day – sitting on the edge of a blast wall, I can hear the shouts coming from the handful of US troops playing basketball on the court nearby. Its something they couldn’t do a year ago – this base in southern Baghdad was mortared on a regular basis.

Few of the soldiers are even aware that it’s Veterans Day – far away from the ceremonies and parades back home in America, they are still fighting a war that the world would rather forget about. Many are on their 2nd, 3rd, or even 4th deployments.

“It’s a hard thing” 23 year old SSGT Raymundo Rogriduez who we interviewed yesterday for our veterans day package had told us. “When I did it the second time, coming back for this deployment I kind of told myself not to get too attached towards the end…because I knew when the day came it would be harder for me to get on that bus, that one last hug, that one last kiss, and you know tell them I will see you when I finish working.”

So many Americans made that promise but couldn’t keep it. Others have returned home physically and emotionally scarred, trying to re-enter the “normal” world in a society that is distanced and disassociated from war, where few can even begin to relate to what life here in Iraq is like.

“I think the thing that will change the most for me is that I will feel a great need to try and educate family and friends and anyone who will listen to what its really like over here.” 25 year old Lt. Rob Ganim on his first tour who just stopped by for a chat said.

“I think I will find myself emotional towards people that don’t understand and say things that they don’t have any true experience or knowledge of. I feel like its my responsibility as a soldier and a leader to make it clear what we’re really doing.”