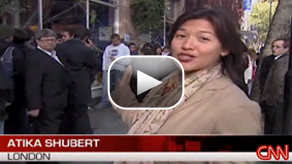 Watch Atika's report on the petition to posthumously pardon 'witches' executed in the U.K.


I have to say, I thought it would be a lot harder to find a modern-day practicing witch in London.

But all it took was a google search, a phone call and a 5 minute walk from the office to find Christina Oakley Harrington. She is a practicing Wiccan – a believer in pagan rituals and modern witchcraft.

Her bookstore, Treadwell’s, is a warm and homey place tucked into a small street in London’s Covent Carden. There are little vials and packets of herbs, multi-colored candles, the odd 19th century mixing bowl and an engraved Celtic sword.

And tons of books. And more books. Spellbooks, Grimoires (a magician’s manual for invoking demons, should the need arise), tomes on Jewish Mysticism, the Occult, Alchemy… you name it.

My cameraman thumbs through a book of voodoo and finds a step-by-step guide to silencing that annoying guy on the bus who thinks the whole world wants to hear his phone conversation. Pins in a wax doll’s ears will do it, apparently.

It turns out Christina is a really nice witch. She happily agrees to an interview and tolerates my faltering questions about what a Wiccan does exactly.

Answer: Folkloric nature worship and the occasional mixing of herbs and casting of spells – for good causes only, of course. And she doesn’t seem the least bit offended when I ask if she can twitch her nose like Samantha on Bewitched.

Since she’s also an academic expert in medieval witchcraft, we talk about a new petition submitted to the British Ministry of Justice demanding a pardon for the hundreds killed for practicing witchcraft between the 16th and 18th centuries. An estimated 40,000 witches were executed across Europe.

What makes the petition puzzling is that it’s being submitted by Angel’s Fancy Dress Shop in downtown London. Angel’s claims to be the largest costumer in the world and has an Oscar statuette for extra credit. It sells about 9000 witch costumes a year.

But this Halloween, Angel’s has decided to rehabilitate the image of the witch at Pardonthewitches.com. They are urging customers to sign the petition and demand a royal pardon for accused witches.

Outside the Angel’s Fancy Dress shop there are about 100 people lining up to get inside and buy costumes, which I find astonishing in itself. But nobody seems to have a clue about medieval witches. Nobody cares, either. They just want to get a funny, frightening and/or sexy outfit to go out and party with this Halloween weekend.

We called the Ministry of Justice. But they didn’t seem impressed. “We don’t comment on individual cases,” was the stiff reply from the press office.

“Frankly, I don’t think a petition brought to the government by a fancy dress shop on Halloween stands any chance of being accepted,” Christina tells me.

Hmm. Publicity stunt, maybe? Not even a little magical spell casting is likely to get this petition approved.

The upside is I have now made the acquaintance of a really lovely witch and learned a little about pagan religions. And I’ve got a handy Voodoo guide for dealing with the next editor who assigns me a story like this on Halloween.