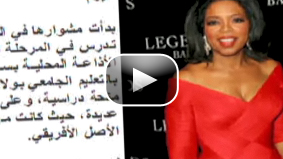 She's viewed as the face of success.. and her story inspires so many women particularly in the Arab world...

When Arabs are asked why they like Oprah Winfrey, many say she empowers them... teaches them... and gives them something to look forward to.

A woman we caught up with in the streets of Beirut said, "She also gave me courage to speak out about certain problems we don't (usually) speak about… like women’s freedom and sex abuse."

Women’s rights and sexual abuse are often completely taboo in most of the Arab Middle East, which remains conservative– unable or unwilling to address tough topics openly. A woman is sometimes forced to hide the fact that she was raped for fear of repercussions from society or even her own family. Yes, honor killing continues to be practiced in some parts of the Arab world.

The Saudi-owned Middle East Broadcasting Center is based in Dubai in the United Arab Emirates. It ushers Oprah Winfrey straight into people's homes across the Middle East region five days a week... in English with Arabic subtitles.

The show is popular among Arab women, many of whom are still fighting for basic rights, such as driving or traveling without male guardian permission.

Maha Al-Faleh is a Saudi professional who sees Oprah as an inspiration. She says, "I witnessed first hand women opening up to their families about their own fears and insecurities when they were inspired by either Oprah or her guests."

Buthaina al-Nassr, is also Saudi.. She's a popular TV personality who is inspired by Oprah. She tells CNN, "We have many great writers, TV presenters and successful talk show hosts but we have no Oprah.. man or woman. The reason is that our governments aren't ready to see an Arabian Oprah on TV." Al-Nassr points out that “without true democracy and freedom of speech no Arab man or woman can do what Oprah does.”

It’s not just women who like Oprah and follow her show closely. Some men also offer praise for the talk show host. A man we interviewed in Dubai says, "I think that she is such an influential lady with the capability of influencing ladies and giving them a sense of achievement and a sense of projecting what is good about being a woman.” He adds, “It's nice to be a mother, it's nice to be a housewife but I believe a woman would be much more helpful to society if she is given her rights and more freedom to achieve her goals."

An Arab world fascinated by one woman who is crowned in one article as "the media queen." Some Arabs say, with the freedom of speech they're fighting for– perhaps one day they'll crown their own version of Oprah Winfrey.