Rap for your favorite candidate

Editor's note: Students from The Ron Clark Academy are studying politics in an unusual way... holding mock debates, but also rapping about the upcoming Presidential election. Sixth and seventh graders joined Mr. Clark and performed their latest song You Can Vote However You Like, putting their own lyrics to T.I.’s Whatever You Like. Here are some of the lyrics: 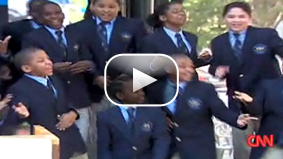 Obama on the left
McCain on the right
We can talk politics all night
And you can vote however you like...

(McCain supporters)
McCain's the best candidate
With Palin as his running mate
They'll fight for gun rights, pro life,
The conservative right
Our future is bright
Better economy in site
And all the world will feel our military might

I want Obama
FORGET OBAMA,
Stick wit McCain you gone have some drama
MORE WAR IN IRAQ
Iran he will attack
CAN'T BRING OUR TROOPS BACK
We gotta vote Barack!

(Obama supporters)
But McCain and Bush are real close right
They vote alike and keep it tight
Obama's new, he's younger too
The Middle Class he will help you
He'll bring a change, he's got the brains
McCain and Bush are just the same
You are to blame, Iraq's a shame
Four more years would be insane

I want Obama
FORGET OBAMA
Stick with McCain and you're going to have some drama
We need it
HE'LL BRING IT
He'll be it
YOU'LL SEE IT
We'll do it
GET TO IT
Let's move it
DO IT!

I'm talking big pipe lines, and low gas prices
Below $2.00 that would be nice

Editor's note: Ron Clark has been called "America's Educator." In 2000, he was named Disney's American Teacher of the Year. He is a New York Times bestselling author whose book, The Essential 55, has sold over 1 million copies and has been published in 25 different countries. His classes have been honored at the White House on three separate occasions. Ron's teaching experiences in New York City are the subject of the uplifting film, The Ron Clark Story, starring Matthew Perry. Read more about the Ron Clark Academy.