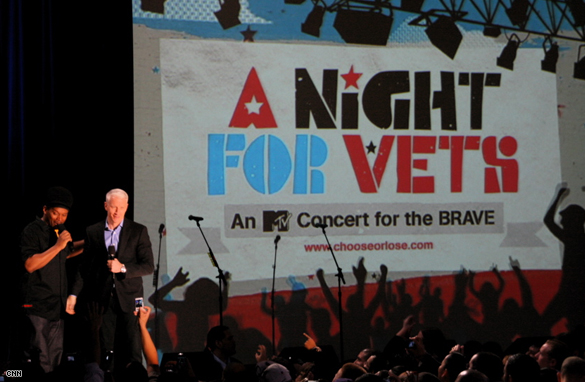 Last night just before the broadcast, I was at the Nokia theater in Times Square for a really cool night in support of our troops. CNN and MTV teamed up for a tribute to veterans home from Iraq and Afghanistan, and the brave men and women who are still serving. The place was packed with vets and their loved ones, and it was such an honor to meet them and be a part of the event. (Here's a sneak peak)

My buddy Robin Meade from Headline News was also involved, and she did a great job, she even got a vet to propose to his girlfriend. I’m not sure how she managed that, but the girlfriend said “yes,” in case you are wondering. There were a lot of live musical performances – 50 Cent, Ludacris, and other big names appeared on tape, like Kanye West and Linkin Park. But it really was a night dedicated to veterans, highlighting the lives they live now, and the challenges they’ll face in the future.

The special airs tonight on MTV at 8pm, and then both tomorrow night and Sunday night at 8pm we are airing a 360° special on CNN called 'Back From The Battle.' I hope you'll watch. I think you will really be moved by some of these vets stories, by their courage, and by their determination.